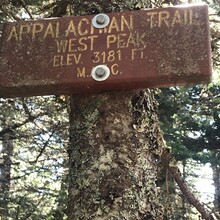 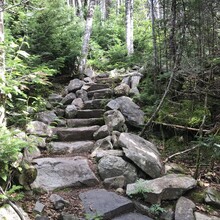 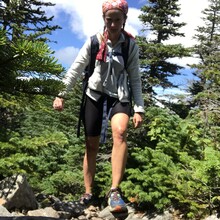 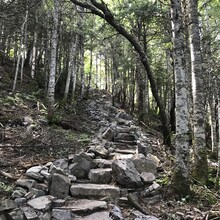 I arrived at the Gulf Hagas parking area at 8am on Aug 19. The first 5 miles was relatively easy trails with gradual climbing. I made great time. At about 5.5 the trail starts to climb Gulf Hagas mountain very steeply. From here it’s like a steep roller coaster. I descended Gulf Hagas mountain, then the steep climb up west peek. From here I descended West peek and then climbed steeply up Hay mountain. Then the decsent down Hat mountain, then finally the steep climb up the Whitecap.

The trail was very busy with both day hikers and Appalachian trail through hikers.  After turning around at the summit I still had to do the descend and climb of  Hay mountain, West peak and Gulf Hagas mountain.  All four of the peaks had a lot of built-in stairs in the trails which I greatly appreciated.  My legs were really achy and worn out by the time I summited Gulf Hagas mountain the second time.  I was grateful that the rest of the run was going to be relatively easy. I made up some time in the last few miles after moving rather slowly through all the climbing.

The very beginning in the very end of this route included fording the west branch of the Pleasant River. On the way back I was crossing it in the pouring rain. I’m just glad the rain held off until the very end.

I carried all my own supplies since it was relatively short.