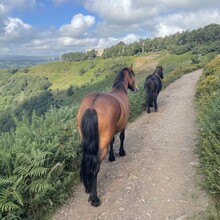 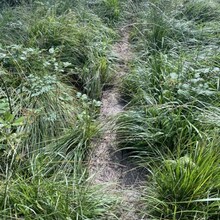 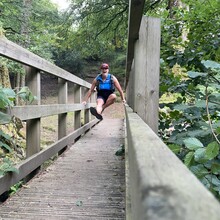 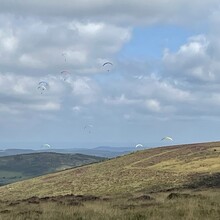 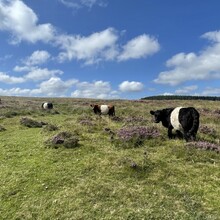 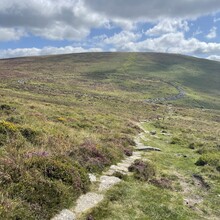 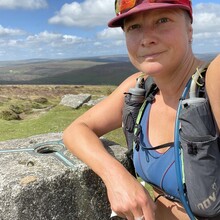 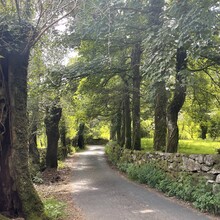 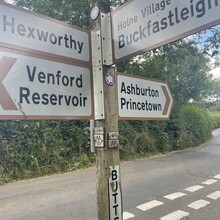 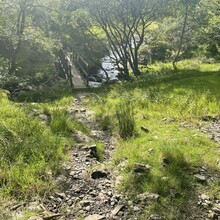 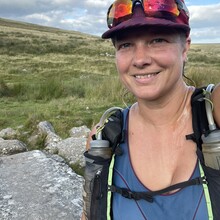 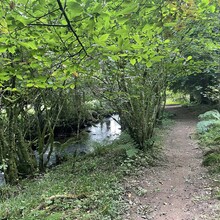 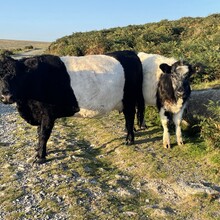 What do you do if you haven’t done much running lately? Call it a taper and go for a long one ? I wanted to do a long run today so make up for little running in August but I was thinking more of 18 miles, not double that. On Thursday though, just two days ago, someone posted on the South West Trail Runners group looking for a lift from Ivybridge to Okehampton so they could run across Dartmoor. I had previously plotted a route across Dartmoor on the Two Moors Way, one that I didn’t mind how fast I did it, so despite being a bit out of shape, I figured we could both help each other out, and it worked out well. We met at Ivybridge, I drove David to his start at Okehampton, then found a place to leave my car just north of the A30 near Drewsteignton so I could head into the National park on the Two Moors way. Thankfully it was downhill to start.

It was due to be a warm day so I’d brought 3 litres of drink and my pack was uncomfortably heavy and hurting my back, I felt a small niggle in my knee too from the weight. After just 1 mile I realised this may scupper my plan to go running in Scotland in a week time, even if it did fix the deficit in my August mileage.

The trail passes through Drewsteignton, ascends Piddledown Common then heads west towards Castle Drogo, high above the Teign river with a wonderful view down the valley. After 1 hour I’d done 3.82 miles, giving an Estimated Time to Completion of 9:25. This is a pace I continued.

The path then drops down to the Teign and follows the river for some way, another pretty section, and cooler in the shade too. I saw a chap with secateurs pruning back the nettles by a stile, very socially minded and earned a thank you from me. In the second hour I covered another 3.8 miles. There was then an overgrown section with a narrow boardwalk, which required some care not to fall off the edges; half an hour of that and some fields and I was out onto the heat of the moor.

I had been keeping my heart rate to about 158 max, but I let it rise to 167 here as I was following the right hand side of a nice, broad, gently rising whaleback ridge that was comfortable to run along. Nearing the top there was a group of cows, the first of many, but there were two people sat at a boundary stone by the edge of the group and the cows didn’t seem at all bothered so I decided they were friendly. After 3:12 I was a third of the way in. The route descended the broad, gentle hill, and swung east to head past Birch Tor and over to Hookney Tor. I developed serious stomach cramps here due to the unavoidable time of the month. I took some ibuprofen which usually helps but it made no difference whatsoever. Heading south to Grimspound I had a welcome distraction from 7 or 8 hang-g liders swooping and turning over King Tor. The sun was out and the multicoloured wings looked fantastic against the blue sky.

4 hours had passed now and I’d done an additional 3.65 miles. I wasn’t in good shape: I was heavy (just bordering on overweight again having put a bit back on) and stiff, but I was getting on okay. Next came the familiar Hameldown hill, another broad whaleback ridge. The mainTwo Moors Way does a detour over to Widecombe in the Moor after this but I think this is optional and you can carry straight on and cut the corner off. Unfortunately though the path on the OS map doesn’t exist on the ground and I swing away by accident, so I went back thinking I’d missed it to find it not there, before picking my way through the gorse to reach the road to Jordan. Passing Dockwell farm they were just about to move the cattle but I got lucky and passed through just before.

At 4:46 I was half way through, and after 5 hours I’ve done another 3.85 miles, faster due to the downhill off Hameldown. Out of Ponsworthy there was a steep uphill. I started to get a hotspot on the inside of the ball of my right foot. At least my stomachache had finally gone. I was taking salt tablets every 45 minutes using a countdown timer on my phone, I’m not sure how much they help but they always feel like magic little sweet. From here the route follows the good track of Dr. Blackall’s drive, high above another river valley, the Dart this time, then drops down to Spitchwick where there were two ice cream vans, but despite a sudden craving could not partake if I wanted to claim this as an unsupported FKT. It wouldn’t be a fast time but if I got in first it would still count!

At 16:03, after 6:28 of running I was 2/3 of the way through. The second third has been longer than the first, so I predicted that the final third would be 4 minutes longer again which meant I would finish at 19:23, which was inside 10 hours and well before sunset. I worked this out whilst dropping down into Holne, then oddly I quite enjoyed the big uphill track out of Scorriton. I’d missed the 6 hour stats, but after 7 hours I’d done 25.77 miles, an additional 3.45 miles for each of the last 2 hours. The track led up onto Scorriton Down, a quiet bit of moor. The trail here was really confusing to follow. It was crisscrossed with other tracks that converged and diverged, none of which were on the map, and the correct one was very nondescript and at times overgrown, but I just followed the gps and it was easy enough to head the correct way. Then it flattened off over a featureless stretch of more then along the river Avon. Here I feel like I kept walking when I could have run, I was tired and my head was completely elsewhere, not really aware. I noticed absentmindedly that my hands were swollen and my rings were really tight.

The ground was a little boggy in places for the first time, but it was good to be near water as I had run out of liquid so I filled up with another litre and treated it with some old chlorine tablets. I crossed the Avon on a clapper bridge, said hi to some wild campers, then began the final steep uphill to the Red Lake Tramway, otherwise known at the Puffing Billy. 8 hours came around and I had only added an extra 2.69 miles, very slow but there had been a lot of up, and at 8:04 I reached the Puffing Billy and there was no more up and only 7.7 miles to go. My watch had partly given up here as well as my body and it would no longer tell me my heart rate, but I was relatively steaming along the tramway at 12 minute miles. And I could see the sea from here too! I stopped for the loo with just 3.2 miles to go, and crouching down seemed to be a huge mistake as when I stood back up again the back of my right leg had gone ‘ping’ and I couldn’t straighten it. Could it be all over, this close to the end? I hobbled for a bit and it was really painful, but I soon discovered I could actually still run if I adopted a bent-leg hobble, and I staggered down the final track and road to cross the railway at Ivybridge, arriving at the Dartmoor National Park sign dead on 19:23 as predicted.