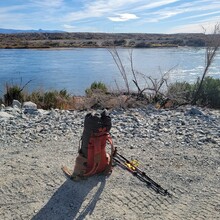 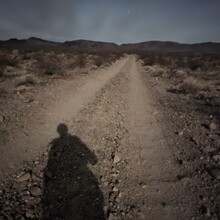 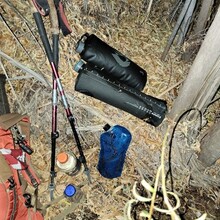 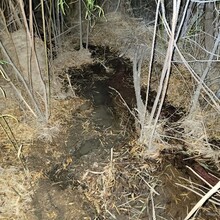 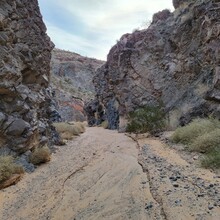 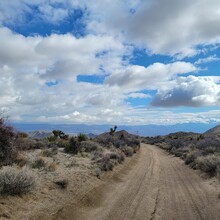 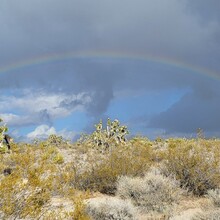 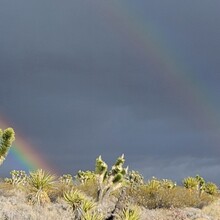 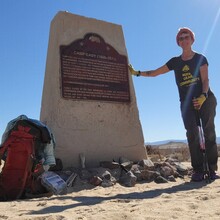 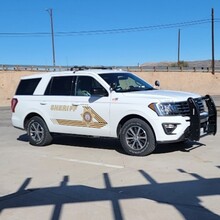 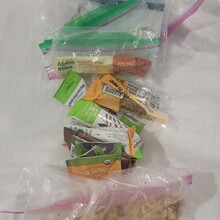 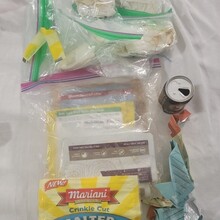 Guides I used for this trip: Mojave Road Guide by Dennis Casebier (recently deceased-RIP), Hiking the Mojave Desert by Michel Digonnet, Evan Brashier’s account on the FKT site, the .gpx file on the FKT site, www.nps.gov/moja and other official NPS social media platforms. I followed the rules of Mojave National Preserve, camping in existing campsites or disturbed areas, away from water sources, ½ mile from Fort Piute, and ¼ mile from paved roads. I packed out everything I packed in, including toilet paper, and did not use any public facilities such as pit toilets, garbage cans, or picnic tables.

I took a bus, a train, a bus, and a train from Davis to Needles. The train arrived around 1 AM Sunday 1/16. I had prearranged a taxi, but no taxi appeared. When I called the number, the recording said they closed at midnight and didn’t reopen until 11 AM. I walked to the nearest hotel and got a room. Another taxi company said they opened at 8 AM so I planned to contact them in the morning (later in the morning).

The next day, a nice man from the better cab company gave me a ride to mile 0.8 in his 1996 Lincoln Town Car that he seemed proud of. As I was waiting for him in my hotel room, I continually drank water, peed, and checked the parking lot, repeatedly. As it was, I had to pee the moment I got on the trail, so I know I was well-hydrated.

A few groups were camping and driving around on ATVs from miles 3.5-5.5. At mile 5.6, I took the hiking trail through the canyon, rather than the road, and saw petroglyphs. I saw 3 separate coyotes loping around as I gradually climbed 2000 feet to the Piute Mountains. Around Mile 12, where Casebier describes the road like this: “there are major undulations…these dips are sharp and some quite short”, I noticed a grey Tacoma approaching behind me. Because of the nature of the road, I was walking just a little bit slower than he was driving so it took a while for him to catch up. When he did, we shared a laugh about it and he made a comment about me having it easier and I agreed.

Night fell after I crossed Highway 95 and entered Piute Valley. The moon was big and I didn’t need a headlamp most of the time (photo). As I approached Fort Piute, I began looking for a campsite. I found one with a fire ring and made camp at 7:50 PM around mile 22. Soon after dozing off, I felt rocks under me. I added some air to my Thermarest. Shortly thereafter, I felt rocks again and realized my mattress was losing air. I got up to inspect it and it mocked me by partially re-inflating. It appeared the valve might be at fault. Maybe I would try duct tape at some point. That was the first of four bad nights of sleeping directly on the ground. My sleeping bag doesn’t have down on the part that touches the ground, except at the feet. A sleeping pad is supposed to serve the purpose of insulation. The ground in the desert gets cold! And it’s cold immediately upon sundown. And sand isn’t necessarily that soft, FYI.

Day 2, I got going at 4:52 AM. I took the hiking route to Fort Piute and through Piute Canyon. First, I needed to find Piute Creek in the dark and load up on enough water for the next 90 miles (photos). At Fort Piute, I inspected the ruins and found access to the creek near the interpretive sign for the Chemehuevi House. I cameled up on as much water as I could and collected 8 liters to carry and treat (photo). Around dawn, I started on the trail through the canyon. It was easy to follow at first, but near where it drops to the canyon floor, it fades out, except for some rock cairns. I picked my way around and eventually found a way down to the bottom. It wasn’t the sketchiest thing I’ve done, but with all that water sloshing around in my pack, I felt unstable. Good thing I didn’t try this in the dark! Once on the canyon floor, it was a pleasant hike (photo), with a few easy climbs up dryfalls. The canyon and gorge are so pretty. Climbing out, I headed on my way across the open desert of Lanfair Valley to a gorgeous Joshua Tree forest.

I saw the grey Tacoma again and we exchanged pleasantries. He said he was exploring and I said “me too!”. Again, I hiked into the darkness, and guided by the full moon, I came to Rock Spring. I had previously planned on checking if there was water at the spring, but I didn’t feel like heading off course, even for a few tenths of a mile, so I passed it by (later I read that it was only 700 feet! Oh well). I saw the eyeshine of many wolf spiders in that area and a long-eared owl swooped over me as I climbed the road. I circled around Government Holes and saw the windmill and dry concrete watering trough. Soon after, at 7:36 PM, I found a bare spot by the side of the road just above Rock Spring Wash at about 5,000 feet elevation (mile 48).

I was awakened about 2 AM by rain. I was a little worried about this possibility as I didn’t pack a tent. In the preceding days, I was undecided between a tent, and expensive 10 oz bivy, and a 3.8 oz emergency bivy.  I settled on the emergency bivy and I’m so glad I did! I opened it and shimmied into it, sleeping bag and all, and pulled it over my head. It was stiff enough so that it wasn’t right on my head and silent (some emergency material is loud). The rest of my gear and food were in a waterproof sack. I stayed dry that night and used the bivy the next two nights for warmth.

Day 3, it rained lightly all morning and I eventually departed at 4:33 AM. My down coat got wet but I figured it would dry later and it did. After the sun rose, I saw two maintenance workers drive up along the short paved section of road and then a young female ranger, who asked me if I was okay. I assured her I was fine, and she carried on. I passed Marl Springs, but again did not check to see if it had water—it was 0.1 mile out of my way! I passed the Mojave Mailbox at 3:15 PM and signed in. The last person signed the day before. I found an iPhone by the side of the road and took it with me. Later, I was able to charge it and turn it on, but that’s as far as I’ve gotten as of this writing. It had been very lightly raining again but the sun was bright, so I turned around and saw the most incredible double rainbow of my life (photos)!

Again, I hiked by the bright moon until I made camp just before Seventeenmile Point (mile 82) at 7:53 PM. It was a bad night. I was very uncomfortable but being uncomfortable is a good motivator to get up and continue hiking. I got going at 4:59 AM.

Day 4, I crossed Soda Lake. It had been closed to vehicles and I was worried that it would be soft and difficult to walk on, but it was firm and easy. I entertained myself by finding large salt crystals and eating them—yum! I took a selfie at the Traveler’s Monument. I was so sleepy—when I stopped to rest, I dozed off repeatedly. It was warm too. The sun went down as I approached Afton Canyon, so I never saw the beautiful canyon, AKA the Grand Canyon of the Mojave, during the daylight. Fortunately, I had explored it two years earlier. It must be one of the most underappreciated places in California. I “camped” in the canyon at 8:08 PM at about mile 114. I actually just sat back and fell asleep. My back hurt so much from sleeping on the ground that I wasn’t eager to do it again.

Day 5, I left at 2:21 AM and hopped back and forth across the Mojave River. I collected about 2 liters of water and treated it. Later, I realized how brown it was, but it tasted okay. After Afton Canyon Campground, I continued in the riverbed, but never saw water again. The day dragged on. The scenery was sometimes uninteresting, but I saw many animal tracks in the sand and identifying them kept me occupied. An old truck lay mostly buried in the wash. I eventually made it to the Camp Cady monument at 12:15:41.  At this point, I was about 17 miles from the nearest hotel and 27 miles from Barstow, where I needed to catch the bus-train-bus home. When I reached pavement, I requested Uber, then Lyft. No driver wanted to come out there. Uber was very apologetic and gave me a credit. I stuck my thumb out to every passing car. Late in the afternoon, I became overwhelmed by fatigue and despair. I sat down by the side of the road and cried, which is not like me, but in hindsight I realize this was due to sleep deprivation.

I texted with my friend Kathi for awhile and she looked up some contacts for potential rides. One of them was a cab company that I called twice but got no answer. Eventually I recovered and pressed on. About 4:45 PM, someone from that cab company called and wondered if I needed a ride! Yes! They picked me up about 5:30 and brought me to a hotel where I had a hot bath and bought beer at the liquor store across the street and ate peanuts for dinner. I watched Moonstruck, called my husband, and slept.

The next day, I bought some clothes at Walmart, had breakfast and a margarita. As I was walking to the train station, I saw there was a short stretch over a hill where there was no shoulder on the road. I started walking quickly against traffic when suddenly I heard a voice saying, “you’re going to get hit.” I thought go away I’m trying not to get hit, but then realized it was a sheriff’s deputy driving behind me. He instructed me to walk in front of him until he could pull off. Then he had me get in the back of his car and he ran my name and birthdate. I came up “negative”.  He deposited me at the train station. The rest was uneventful! Photos show food and garbage I carried out (note dirty toilet paper).

Quite a tale!  Congratulations on the FKT and surviving a challenging traverse!