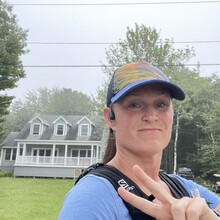 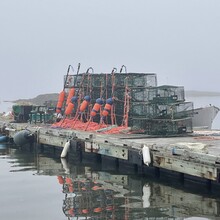 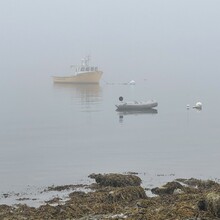 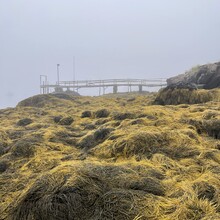 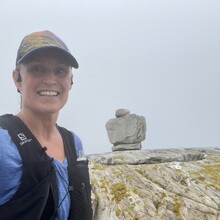 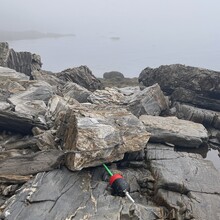 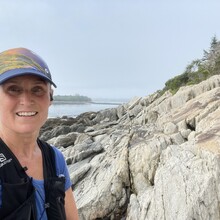 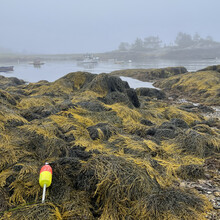 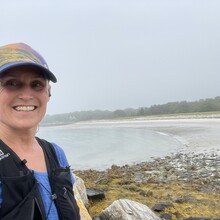 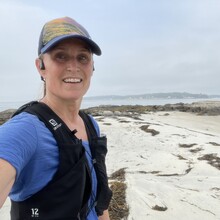 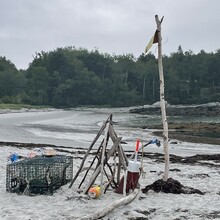 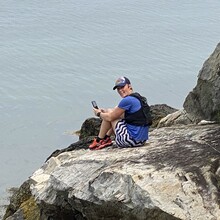 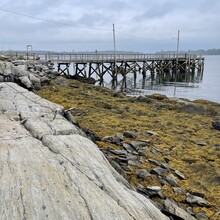 I decided to do this FKT while on vacation at my parents summer home, so I started/ finished at their house @ 607 Island Ave and went clockwise around the island.   The reason for my visit was the Ödyssey Casco Bay SwimRun which I had completely 2days prior on Sunday.  I started shortly after 6am planning to head out a little over an hour before full low tide, thinking it would likely take me about 3 hours (1 hour longer than the men who have done this).   Oh how wrong it was!  I was a full 2 hrs slower and finished in 3:57.   The course was a mix of shoreline scramble, beach running (the best!), and walking around on all 4s (arms and legs) through thick wet heavy seaweed.   My arms are more tired than my legs from this “run”!   It was heavy fog when I began some slowly started to burn off towards the very end of my run.  My favorite parts were definitely the beaches when I could relax a little and stretch out.  Many of the rocks at low tide were like black ice and super super slippery.   I can’t fathom how the men who did this went so fast.

extra special on this route was passing through Fowler’s beach which is the beach that my husband and I were married on in 2008.  It’s not everyday that you get to do an FKT at the same spot you were married!

I ran completely solo but did check in with my husband/ mom via text along the route with my progress as they were worried about me running this route.  I ran with my Salomon vest and just used what I had with me for water/ nutrition.  I was wishing I had brought a second flask of hydration and a 2nd gel due to the fact this took so much longer than I realized and was getting a bit bonky at the end.  Additionally I did take a pressure bandage along in the chance I took a hard fall and needed something while I was out there.   I did *almost* go down a lot but managed to make it through unscathed.  My ankles got a bit banged up but otherwise all good.

this is a super tricky “run”    Definitely shorter and sweeter than some of the LONG FKTs out there - but it most definitely had its own unique challenges and I walked away feeling super proud of my accomplishment!