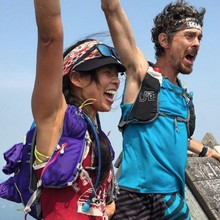 International champion ultrarunner Scott Jurek beat Pharr Davis' time by just 3h13m, hiking from Georgia to Maine during May 27 to July 12, 2015. Jurek was crewed primarily by his wife, Jenny. He had tons of company during the trip as many admirerers ran with him along the way. His tweets and Facebook posts from the trip (minus the photos) are recorded below, and Ian Corless has provided a similar timeline that includes many photos. Jennifer Pharr Davis wrote a nice perspective on the FKT for blueridgeoutdoors.com This was Jurek's first experience with the AT (other than short outings on sections totalling less than 30 miles), and his first multiday run. He overcame two injuries early in the trip which put him behind schedule for some time. A thorough article appeared on the RunnersWorld website, and Jurek's own recap was posted to his blog.

Sometimes the most memorable moments in our lives are those that were the hardest and the darkest moments. I think that was the case with me, because getting through those dark, deep moments that we remember the most can be the most rewarding, that we learn the most lessons from. That's what makes us stronger and better people in the end. -- Scott Jurek

Scott & Jenny Jurek have published a book about their AT experience:  https://www.amazon.com/North-Finding-While-Running-Appalachian/dp/1478916710