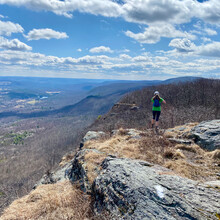 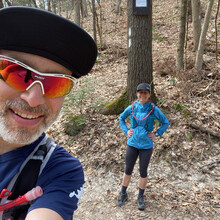 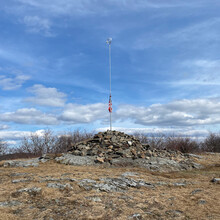 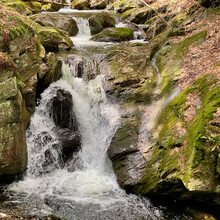 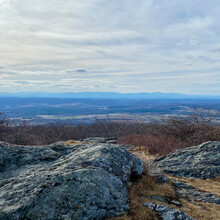 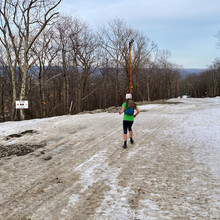 Yesterday, Debbie and I did the Taconic Rim route for the first time. This was an excellent adventure. Full report is on my blog. We went counter-clockwise after spotting our bikes and Catamount Mountain Resort. We parked at the Appalachian Trail trailhead on Jug End/Guilder Hollow Road. We did the "U" running south on the east side and then back north on the west side. Conditions were really good. The air temperature was perfect for running.

We had clear views and bright sunshine. There was ice on the north slopes and a little snow on the tread way in spots. Some of the rocks were wet and slick. We carried everything we needed and didn't have to treat a bottle of water until the last five miles. I needed just a bit more than the 2 liters that I had carried. Debbie was strong throughout the day. She struggled on a few climbs including a low spot going up Mt. Frissell.

I was good on the uphills but horribly slow on the descents which pounded my legs. I'm glad we went this direction because the harder stuff is in the first half. Catamount still had a fair amount of snow, so it was slow going on the ski trails. We almost missed the final turn off the ski slope where the South Taconic Trail returns to the woods, but we backtracked 100 meters and figured it out. That's the least pretty part of the route, but it's bearable in exchange for other sections that are simply spectacular. The Appalachian Trail views along the eastern ridge were awesome.

We started just before noon and finished at 7:00 P.M. It took us less than 20 minutes to ride (the mostly downhill) combo of gravel/road back to our car. It would have sucked if we had gone clockwise and were forced to ride this section in the other direction. We chose wisely.

This is a highly recommended route that will challenge you with the vertical gain/loss at just about the maximum for this distance in southern New England.