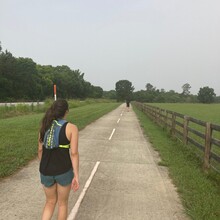 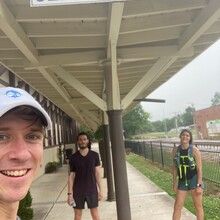 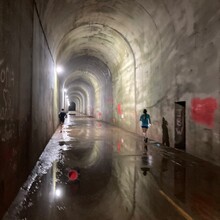 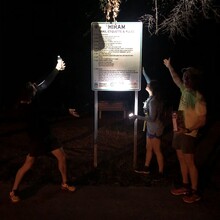 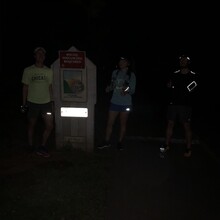 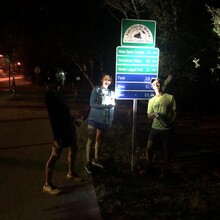 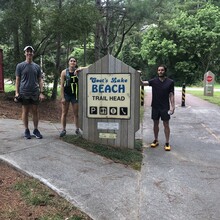 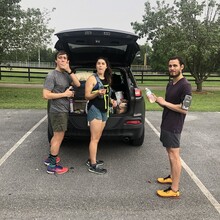 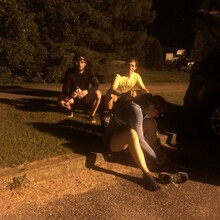 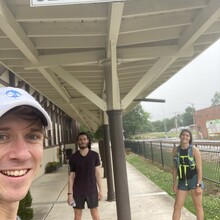 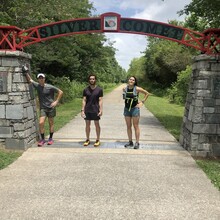 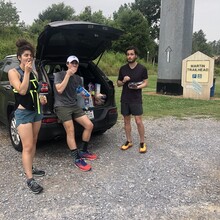 “Maybe?” I answered.  It was Monday. The only thing more negligible than my training was my less-than-healthy diet and sleep habits.

That’s how this whole thing started. On a whim.

Somehow, Alex (our crew) and I convinced two other friends that this plan was excellent, and on Thursday we sat down to hash out logistics. Friday night at 10:30, we picked everyone up in a Jeep laden with junk food (how does one properly fuel for an ultra anyway?) and headed to the Smyrna trailhead. Our initial goal was to run the entire Silver Comet Trail and connect it with the Chief Ladiga Trail, cramming in just around 94 miles in 24 hours, a plan more audacious than ambitious, and more stupid than either of those.

We spilled from the Jeep, filled up our water bottles, and stood for the obligatory photos. The sky was clear, but the moon was just a crescent, and it was darker than I expected. Tyler, Jerry, and I shook out our legs while Alex told us the “plan”.  We’d meet him at the Hiram Trailhead Parking Lot, just over 14 miles in. I was familiar with this section, having met James Wray at the Hiram Trailhead to pace him through the last stretch of his recent Silver Comet FKT attempt (congrats, James!).

After shaking out the running-in-the-dark jitters on the otherwise unpopulated trail, the first 14 miles went quickly. While we initially started in the 10 min/mile range, the gait didn’t feel quite right, and both me and Jerry’s knees & hips started to hurt. Tyler, by far the most prepared in the group, felt OK with the pace, so Jerry and I loped at around 9min/miles, alternating it with 30 seconds of walking every so often to let Tyler catch up.

The bathrooms along the trail had finally opened again, and we made a quick pee stop somewhere between the start and Hiram-it was a pleasant surprise to see bathrooms open, because last time I was on the trail, they had all temporarily been closed.

We spent most of the first 14 miles chatting, deciding if we were seeing fireflies or the reflection of eyes, working out nerves, and discussing strategy.  Food and hydration were a big concern, because 2/3 of us hadn’t ever run an ultra, and Jerry’s longest-ever run was just 20 miles.  These miles passed quickly, and we were excited to see Alex, our crew, at our first “aid station”

While our goal was to keep our aid station stops short, the trunk full of snacks and Alex’s good cheer would keep us longer (not for the last time!).  We made a plan to meet up with him at the next big parking lot, along Rambo Road 7.5 miles away.

We kept a good pace for these miles, and felt good rolling into Rambo Road. While my initial plan was to minimize impact by running on the soft dirt shoulder, this proved to be pretty challenging in the dark, and I ran most of the way on the asphalt.

We met Alex at Rambo Road, and grabbed some more fuel.  Annie’s Cheddar Bunnies quickly became a fan favorite, along with Tailwind & Nuun.  While the temperature was cool (around 70), the humidity left me surprisingly sweaty.  In retrospect, this probably would have been a good time to slow down. We really struggled with making quick aid station stops, and already began falling into the habit of hanging out with Alex a bit too long and grazing on snacks rather than grabbing and going. But, this did keep our morale high & helped alleviate some of the tension from running in the dark for so long.

From here on out, the entire run felt more like running  “sections” of the trail, with the “sections” being broken up by aid stations. Instead of looking at how far left we had to go on the entire trail, it seemed much more palatable to instead count down the distance until our next glorious aid station rest. Between Rambo Road and the Coots Lake aid station, this became especially apparent. While it was just over 11 miles of running between the two aid stations, we really started to slow down and start walking more on this leg.  The miles dragged by, and we realized that more frequent aid stops, while time consuming, would probably be necessary to help break up the distance mentally for us, and to keep us as hydrated as possible. Coots Lake is at mile 33 of the Silver Comet Trail, which meant that during this leg, both I and Jeremiah ran our first 30 miler!  It also put us around halfway finished with the Silver Comet.  We arrived taking just over 6 hours, and realized that with the pain we were all starting to feel, it was going to take us a much longer time to complete the second half of the run. Somewhere along this section, it also got light out. As excited as we were to lose the headlamps, it also shocked me how quickly 7am rolled around.  We stocked up our food, changed into dry clothes (and into our day-running clothes) and prepared to run to the next aid station

Relatively traumatized by our 11 mile stint, we set out to meet Alex just about 5 miles from Coots Lake at the Dean Sport Complex.  My calves began to cramp badly, and I was having trouble bending my right knee, because of the awkward gait I adopted to minimize my calf usage. We mostly walked the first 2 miles, but I managed to get in 3 miles of jogging in the second half of this section (either through the pain lessening, or more likely, just getting used to it and deciding to run anyway).  From here on out, pain management played a big role in how we approached the run, and calf issues would make it nearly impossible to run at some points, though we were able to hold a 15 min/mile pace walking relatively easily.

I switched to snacking on pickles, along with some other snacks, but at this aid station we also discovered that Jeremiah had brought some blueberries (delicious), and started working on some ginger ale to combat nausea.  Our next stop was 7.1 miles away, at Grady road, and we set off with some trepidation.  I was beginning to feel some brain fog, and Tyler was definitely feeling the lack of sleep.

We started off walking quite a bit, and worked into a jog. A lot of this leg was along a busy road, and it ended up getting quite hot. One thing surprising me was seeing people on the trail; since the majority of our run so far had been dark, and devoid of other people, it was surprising to see cyclists (until I remembered that yes, people cycle during the day).  The brain fog continued when, after a particularly good bout of running, I looked down and realized that my water bottle wasn’t in my race vest.  Where had it gone? I assumed it had somehow fallen out and resigned myself to going without one for the rest of the run, but was still pretty baffled. Once we turned into the woods again, the temperatures dropped down to a more tolerable heat, and we wove through picturesque farm land before meeting Alex at the Grady Road Intersection.  I flopped to the ground, dehydrated and confused, and told Alex that I had somehow lost my water bottle. I waded over to the car for some snacks, and saw my water bottle nestled in the back— I had never packed it after pulling it off to refill it. Feeling a bit crazy, I chugged 2 bottles of water to make up for the missed hydration on the last stretch, and made sure to shove my water bottle into my vest before we took off again, aiming to meet Alex at the Martin Trailhead.

Throughout the entire run, I was amazed by everyone’s determination to stick together and support each other. Even though everyone was in a lot of pain, the aid stations and banter really made the time pass quickly. Nobody got grumpy, too tired to chat, or unhappy. Instead of despairing, the mood focused on how cool it was that we could decide on a Thursday to run to Alabama on a Saturday.  Wild strawberries dotted the path, and the blackberries were beginning to ripen.  Though tempting, we didn’t wade into the brambles to pick them.

We were firmly into our furthest-distance territory, and were all slurring our words, having a good time, but in a tremendous amount of pain. Alternating jogging/shuffling and power walking was essential, but we were also getting closer to the end of the trail, and with just two more aid stations to go, it was starting to seem manageable.

After meeting Alex at the Martin Trailhead, we knew we had just 8 miles to go. These were, to put it bluntly, not fun miles. My intestines were definitely displeased. We walked most of the last 8 miles, and stuck to a 15/min mile pace in order to keep on track.  Powerwalking the last 8 miles was relatively dismal, and with 6 miles left, we were all feeling terrible. As a surprise, Alex pulled into a road intersection and offered us one last round of ice, drinks, and snacks. Keeping it light and quick, we stuffed some ice in our shirts, grabbed a handful of chex mix, and I chugged a bit more ginger ale in the hopes that it would settle my stomach.  With surprise refreshments in tow, we began trudging the last 6 miles.

Somewhere along the trail, Tyler started muttering affirmations, and later he took to alternating this strategy with signing oldies.  Jeremiah and I discussed some philosophy, but mainly we kept our eyes on the ground to avoid any of the little pine cones that could trip us up, and we trudged. Slowly the miles ticked away, and about a quarter of a mile away from the finish, we started jogging again. It was excruciating, but we built our pace until we crossed through the arch and reached Alabama. Alex took our pictures, and we started walking to the car, which was parked somewhere off the side of the road along the Chief Ladiga Trail (wait, more walking??).

A whole lot of squirrels

the usual assortment of insects

a mess of cows and horses

Wild turkeys (I thought these looked like dragons/pheonixes at the time, but that was probably just the dehydration)

1 massive grey dog that may have been a horse- unclear