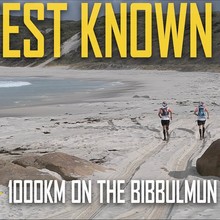 Shane Johnstone, who set out to break a record of WA’s Bibbulmun Track, has finished the gruelling run well ahead of schedule.

The Perth ultra-endurance runner crossed the finish line at Kalamunda this afternoon, completing the 1000km journey in 11 days, seven hours and eight minutes.

Johnstone, an exercise physiologist, smashed his goal of 12 days and defeated the record for the fastest known time of the Bibbulmun Track of 15 days, nine hours and 48 minutes.

Reflecting on his adventure at the Kalamunda Hotel today, he said it was more enjoyable than he had imagined.

“It was the hardest thing I have ever done, but what I liked was I could still enjoy it,” Johnstone said.

“I thought it was going to be pure pain and suffering - it was more enjoyable than I thought.”

A snake bite and subsequent infection forced Johnstone’s running buddy and long time friend James Roberts to abandon the run after day five, adding to the drama of the experience.

Roberts, 30, recovered to greet Johnstone at an emotional finish today.

“That guy is a machine - I think we need to cut him open because he is a robot,” Roberts joked during Johnstone’s run.

“The Bibbulmun Track is so beautiful we are so lucky to have it, but it throws everything at you,” Johnstone said.

“If it’s not sand, it’s hills - you just have to keep pushing through mentally.”

Johnstone averaged 80km a day, running for up to 14-and-a-half hours and 100km each day.

Though he ran the entire track solo, Johnstone had a dozen-strong support crew and a slew of runners joining him for different legs of his journey.

“The whole team experience took the stress out of for me and made it a bit more relaxing than I would have envisaged,” he said.

“I would not have been able to do this on my own.”

Nursing a sore shin at the end, Johnstone said his focus on pacing himself and on recovery during the event paid off.

Johnstone embarked on the challenge to fully experience the Bibbulmun Track and to raise money for Be Inspired - a charity Johnstone set up in 2014 to support disadvantaged youth affected by illness or disability.

He said he was “stoked” to pull off the fastest known time, but that was only part of why he did the run.

“The main thing is we raised $15,000 for the charity, raised awareness of the Bibbulmun and the foundation,” he said.

To support the runners visit www.mycause.com.au/page/167589/bibbulmun-1000-gold-sponsor-travelling-fit