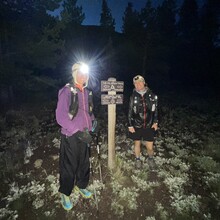 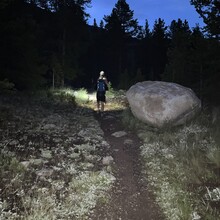 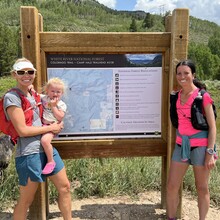 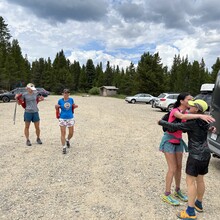 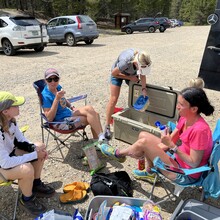 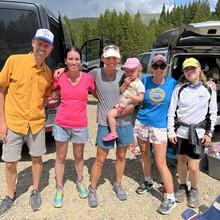 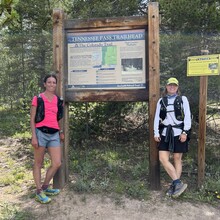 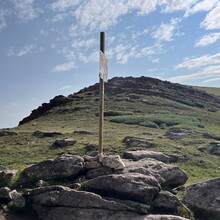 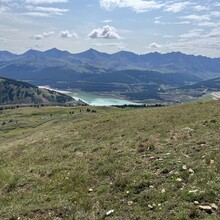 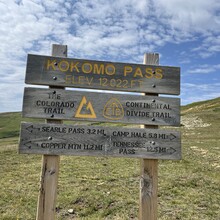 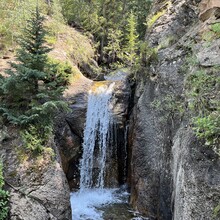 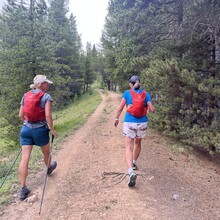 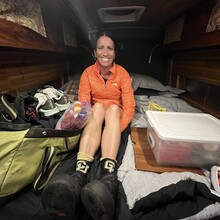 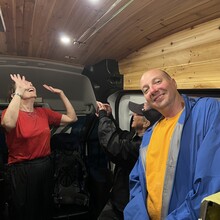 I have been obsessed with the CO Trail for almost a decade now. I completed the CT in 2017 (Durango to Waterton, East variation) and have made numerous other attempts on the Trail. All of my attempts have been supported. I had planned to start in Durango again this year and take the East variation, but the weather forecast in the San Juans was terrible the day I planned to start and in the days before and after, so I made a last minute change and decided to start in Waterton. I also decided to take the Collegiate West variation. I had pacers most of the time, and my husband John crewed from start to finish, with a few minor exceptions. One night (the night I finished at Timberline), he had to drive my pacer back home (which was hours one way), so he stayed at our house that night. I stayed in my friend Lisa's sprinter van, and she got me going the next morning and crewed the next segment. Later in the journey, I was out of clothes, so one of my pacers (Rodger) said he would drive up to Carson Saddle to pick up me and Kim (Rodger's wife, who was pacing that segment), so John could do laundry in Lake City and have an evening off.

The weather, for the most part, was unbelievably good. It was not hot or windy or too dry. I got rained on several times and hailed on once. Only once was there a little bit of lightning, but it did not feel dangerous. The worst of the rain was coming into Timberline. My pacer, Gina, and I were POURED on for THREE SOLID HOURS. We were so wet and cold! I had a magical few weeks on the CO Trail. My support was incredible. For once, my stomach was rock solid (day 3 was rough, but after that it turned around). I ate and hydrated well. Pasta with olive oil and meat (apple chicken sausage, pork chop) and broccoli seemed to sit especially well. I ate a lot of PB sandwiches, rice pudding with berries, and oatmeal. The scenery was spectacular. The Collegiate West reminded me of the San Juans - it's high, big, steep, and goes on forever. The mornings and evenings in the San Juans are unforgettable and made the difficulty seem like not that big of a deal. I hate the section from Sargent's Mesa to Highway 114, and that was no different this year. I did not have issues with route finding. I often struggle in the dark, especially when the trail is rocky, and that was the case this year. Nights were the worst, and I had a few overreactions to tripping on rocky terrain. Seeing a dead cow on the Trail was disgusting. The Cochepeta Creek crossing was more difficult than I thought it would be given the time of year - I was very nervous crossing that on tired legs. I saw several rainbows. I also saw some spectacular sunrises and sunsets in the mountains - the cloud formations and colors were stunning. Typically, I camp a lot on the CO Trail, but this time, I decided to do hotels as much as possible. I wasn't sleeping when we camped, and sleeping in a bed down low seemed to minimize a lot of risks associated with exposure to the elements, effects of prolonged time up high, etc. In the past, I've been so swollen, I couldn't get my shoes on and one night a few years ago during an attempt, I remember laying in my tent with my heart pounding and racing on Marshall Pass, being really afraid that something was going to happen to me. That strategy was effective for me, although there was a price to pay with drive time and the nightmare of traveling on 4WD roads (which I hate). It was worth it.

I have not had much time to reflect yet, but one thing that has stuck out a lot is that in my head, the San Juans are SO hard- they would be the challenge. The first part of the Trail would be relatively easy. I also thought some of the "downhill" segments (especially the last one to Durango) would be easy. Literally every single thing that was easy in my head felt like it was going to kill me when I was out there living it. The San Juans were challenging, of course, but they weren't as hard as they had been in my head. The mind is powerful, that is for sure!

Aug 1 data (segments 8 and 9) are missing on the InReach. We do not know why. John created a group text and shared the tracking link - numerous people were following the effort, and no one noticed an issue with the tracker. I provided screen shots from Strava (which is what my watch - a Garmin Instinct - is synced to). Also have pics IMG_1038-1046 (from John's phone) showing leaving Seg 8, Sheila and Carrie at Camp Hale, hanging out at Tenn Pass, and leaving with Gina from Tenn Pass. John didn't get pics at the end of Seg 9 at Timberline, because it was pouring down rain. Lisa was there in her sprinter van and saw Gina and I leave Tennessee Pass and come into Timberline. Also, Gina and I connected with a thru-hiker before we got to Timberline. Her name was Torch (Jane); she is from Wales and still thru-hiking. She connected with me on Instagram - she runs an adventure magazine called Adventure She, and she can attest to us being out there. I have pictures from Searle and Kokomo Passes on Segment 8, and Carrie ran out from Camp Hale and found me on the Trail. Gina started the day with me and ended up 30-60 minutes behind me - she also can attest to the fact that I completed both Segments 8 and 9 that day.

I feel like this writing is a bit of a jumbled mess. It's hard to put the experience into words right now. I am beyond exhausted, so incredibly thankful and happy, and in awe of the weeks of magic I had out there.