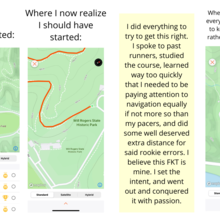 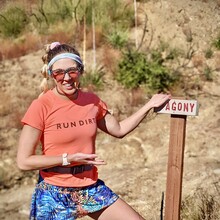 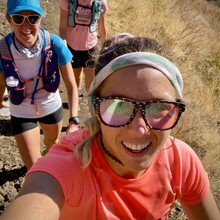 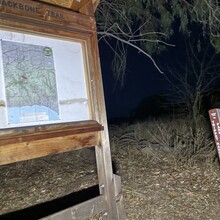 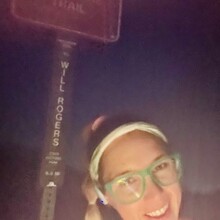 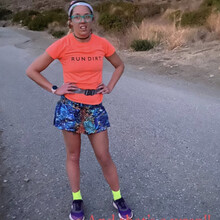 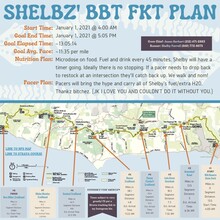 I gave this everything I had-- especially in that last 25. This trail is wild. From the mountain lions that live in the Santa Monica Mountains to the nature of the course itself. This was my first attempt going for a Fastest Known Time, and I'll start by saying-- I am beyond grateful such challenges exist! I learned so much from the experience. Oh ain't that the beauty of running?! Stay tuned for a full blog report on this adventure and LOTS more pictures!

The start: After confusion over where the actual start is, and checking with runners who sent me varying drop pins, I foolishly resorted to the "Full Backbone Trail" Strava segment (https://www.strava.com/segments/25279216). I had no idea of this potential error until hours after finishing. The start was fun. My heart rate was high-- likely the result of nerves and reintroducing caffeine after cutting it for two weeks. My pacer: a badass track athlete that swore he knew this section of the trail. I'm sure he did-- but not in the dark. There were some angry moments in the first 18 miles while I realized that navigation was 100% my responsibility. I ended up losing at least 20 minutes going out-and-back in places I didn't need to be. (Very curious what the exact extra distance and time wasted was... moving on!)

Honestly, it was REALLY hard to move on from the frustration of those miles (and bonus miles). Luckily, my next section was straight forward. I had a pacer that excels in navigation over running fast. (NOTE: This was my first time ever having pacers that weren't my husband! They all were amazing in their own ways!) He made me eat nibbles of a pb&j, I enjoyed a mushed banana more than I ever thought I could, and on we went!

Next segment-- still feeling a wee bit defeated and starting to try to do math in my head to figure out how off I was-- I was SO LUCKY to be running with two truly stud athletes. They coached me to take the climbs slow, reminded me that there was still so much course left. I was able to regroup a little. When I hit the "true spine of the Backbone Trail" a co-worker was waiting with his camera. I felt the fire inside me stoke to levels it hadn't seen before. We CHARGED.

Next came 4.8 miles of girl power! I led the pack on this beautiful section, and the chatting and selfies were plentiful.

I still needed to make up so much time. It was hard not always knowing my exact mileage from the next aid station. Especially when you can tell a road is near but the switchbacks feel like some sort of Alice in Wonderland trick, deceiving you from how far away you really are. Time starts to warp as you run yourself into delirium! My next pacer proved to be a real MVP! His wife is about to have a baby, and after experiencing his attentiveness and leadership skills, he is going to crush being a dad. This section-- the start of the final 25 miles-- is absolutely stunning. We made animal sounds as we pushed pace up and down and all around.

FINALLY, my husband paced me for the final 15.6ish miles. My music and phone died. We never really knew how far away we were from the finish... I was doing so much math trying to figure out what paces I needed to be hitting to get this thing done with the FKT. I knew on the entire rollercoaster I could do it, but making up lost time takes a little magic. He ran like the wind, looking back thinking I'd be teetering off, I hung on with all my might. I opened up my stride, engaged my core, and despite attempting to ask casual day-hikers how far I was from the parking lot (nobody knew, many didn't respond... :::eye roll::: ...but believe it or not this became comical entertainment), I knew I was within range of calling this course record mine!

If I finished any later I would have needed to pull out my trusty Kogalla light. I forced myself to see through the darkness and trust my footing-- ever so thankful for a prescription pair of goodr sunglasses. Out of the trail I burst. It was like I was getting launched out from the bowels of a beast. My friends were cheering-- "run to the gate!" I knew I didn't need to run to the gate, but I felt like taking their advice (hopefully it is that extra hustle that gets me this FKT despite where I started).