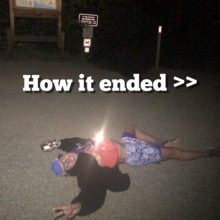 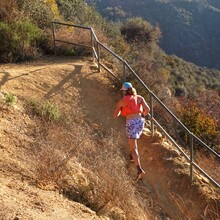 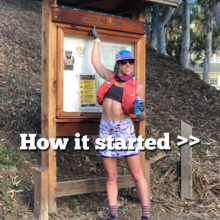 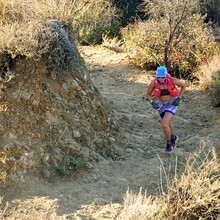 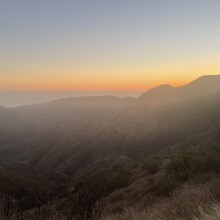 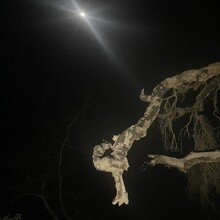 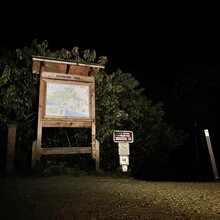 So many cool moments (I bulleted them in the moment on Strava, in no particular order, so I wouldn’t forget):

This was a humbling run. I went into it thinking I could run it like a supported attempt, plus factoring in time for filling up water. Man did I underestimate the effects of the additional weight over duration. It slowly sneaks up on you with every slightly heavier, differently balanced, step. I ran a wonderfully strong and fun first 17 miles (not making navigational errors this time and nabbing the ladies’ CR for that segment), and started to really lose the wheels somewhere after baking in the sun on the climb to Kanan with freshly filled bladders (mile 38ish). It didn’t help that I let myself fall slightly behind on nutrition while playing on the rowdy downhill from Stunt to Piuma. Puked a little around Encinal Trailhead and rallied after a little walking and choking down sustenance (mile 41). For the first time in a while there was a point on this run where I questioned why put myself through it (mile 51, as darkness set in, and I approached my last real road crossing with 17ish miles left to go)? I could stop and have my husband pick me up? Heck-- when I realized how freezing I was going to be in my later-and-longer- than-ambitiously-”planned” final stretch, I could have asked Jason to leave a shirt for me-- but then it wouldn’t be unsupported. I chattered through. Pumping my arms and wiggling my fingers, making a plan to use my Turtle Fur tube to warm up individual body parts one at a time if it came down to it. (Thankfully I didn't get to that point-- there was a miracle of a temperature shift climbing out of the canyons towards Ray Miller.) Okay, but why? Seriously, why? Why six weeks after getting the womens’ supported FKT by the skin of my teeth (holding the record for a week [congrats again Bri])… why go back out there solo, with nothing cached and run it again? Well, I had time to think about it. A) I’m a psycho for a challenge B) It’s to inspire. We have this day, and this body to do rad shit with. The only way I’m going to know if I *can do something* is if I set the intention and do the damn thing. I encourage others to grab life by the balls. At the end of the day: what a privilege it was to be able experience my own fortitude through a raw solo adventure ~68 miles across the Santa Monica Mountains.

The BBT continues to amaze me! Stoked to be the first unsupported solo report.

Time according to the “Full Backbone FKT Strava Segment” is 15:16:51. My previous supported run isn’t listed within that segment because of my Topanga navigational error. Which shall now be referred to as the “Topanga Triangle.”

Watch some video from the run in my IG story, which I’ll post once this submission gets approved! @shelbzzf

Side note: I’m noticing discrepancies at where runner’s are starting. There is an actual sign deeper into the park on the right of the bathrooms, vs. the trailhead closest to the bathrooms.