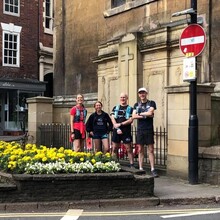 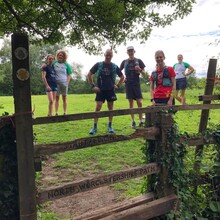 We started in Bewdley around 8am, and joined the path alongside the river for a lovely gentle first 3 miles. After crossing the river, we headed up into the woods and started the first of many climbs! Pace was slow but the spirit among the team was good and the scenery was beautiful. After around 10 miles, we began the stretch of the route that I had recced, and navigation became much easier. At 18 miles, we made a brief stop (20-25 minutes) to take on extra fuel and fluids, supplied by our support team. Conditions were very humid and even those of us who had already drunk a litre or more felt dehydrated.

The second half of the run began with a long, hard climb up to the top of Clent, followed by several more climbs. We were prepared for this stretch, though, so we got our heads down and ticked the miles off. By the time we reached Lickey, we knew the hardest part of the run was done. There were still around 10 miles to go and we were all very tired by this point, but some good banter kept us going and it wasn't long before we trooped into Major's Green to touch the finish gate and meet our supporters!

It was a tough route but a fantastic experience. I'll admit it wasn't super-fast and it probably won't be long before someone beats it. But records are made to be broken, right?

(By the way, Alison's gpx file shows she only completed 31 miles. This is because her phone battery ran out at that point! I can vouch for the fact that she completed the whole route with the rest of us. And the photos show her with us at the finish.)