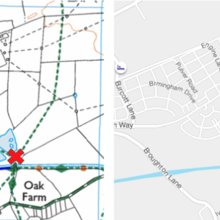 I would advise that anyone wishing to run this that they wait until it has been dry for several weeks.  There were several sections where paths were flooded with about a foot of water for stretches of 30m. There was a football pitch that looked more like a small lake that we had to run around.

The markings were not always great, so you would need to have the GPX with you to avoid missing any turns. The main points that were not clear were:

I would estimate that about a third of this loop is on tarmac paths so the fact that it is labelled as footpaths is a little misleading.

Overall it provided a nice challenge for the day and without the FKT route in mind I would have probably turned back once faced with the rivers we had to run through.