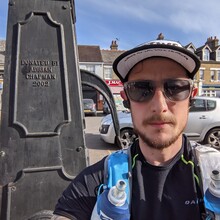 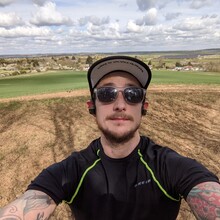 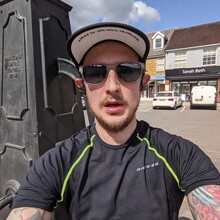 Being the first time I have run a marathon distance, or further, I decided I wanted to incorporate an attempt at a local FKT in to it at the same time!

On 9th April 2021 I started from The Parish Pump, in Rochford town square at around 0900 and headed south towards the footpath beside the Horse & Groom pub.  Being local, I had recced much of the route in advance and knew most of the turnings so could start with a fair pace.

I followed the route out to Broomhills, the former residence of Captain John Harriott, founder of the Thames River Police.  From here it was a pleasant run in good weather along the sea wall beside The River Roach, before turning inland past Barton Hall and the lagoon at Stannett's Creek, (a pleasant place to stop and relax if you're not trying for a time)!

After passing through a variety of farmland and the village of Paglesham Churchend, I reached Paglesham creek and then joined the other main river in this route, The River Crouch.  By this point, I had run around 25km, (as I had run to Rochford from my home in Rayleigh), and my hips and knees were starting to feel tight and sore.  From here onwards came a mixture of running and walking!  I followed the sea wall alongside The Crouch, and had a nice breeze to help keep me cool along the way, along with a couple of sailing boats taking advantage of it.

At Upper Raypits farm, I then turned back inland in order to head uphill towards Canewdon and then Hockley.  Passing through Canewdon gave me a chance to see Canewdon Church during the day, (a site well known with locals around Halloween), and then the opportunity to take some footpaths through farmland that I had never taken before.  There was then a bit of a road section until I turned off, again uphill, to St Andrew's Church in Ashingdon.  I had never used this footpath, nor been to St Andrew's Church and enjoyed the view that it provided of the surrounding area, including the path I has come from.

After the church, there were a few roads and some footpaths taking me through to the back of Hockley and Hawkwell.  Here there were a couple of kilometres on the road until I reached Hockley Woods.  I frequently run through Hockley Woods, so the navigation here was straight forward and I could enjoy the run through the shade of the trees.  After exiting the woods, it was then on to Gusted Hall Woods and following a footpath to the back of The Lawns.  When I had recced this part of the route a couple of weeks back, it was extremely muddy, so I was glad to find that it had all dried up!  Heading down the hill to Blatches Farm, and on to what I felt was the home stretch!

After crossing the River Roach across a small concrete bridge at Blatches Farm, it was just a short run through Cherry Orchard park, across the football pitches on the other side of the main road and then along Hall Road to the finish, back at The Parish Pump in the square.  A slower time than I would have liked, (I was aiming for nearer to 3 hours), but I was happy to have ticked off the distance for the first time!