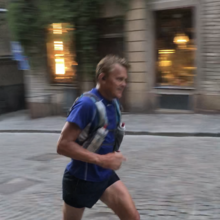 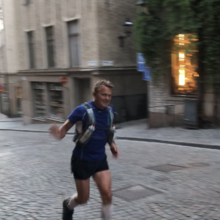 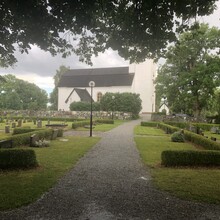 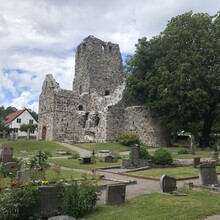 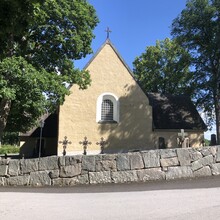 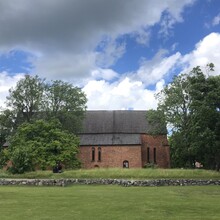 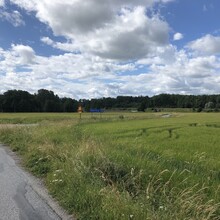 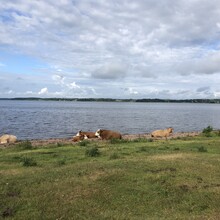 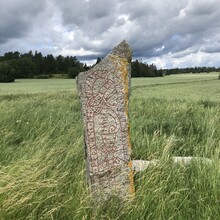 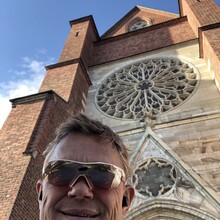 A longer report will be available in swedish on my blog (informagi.se).

After having failed completely with my attempt on Roslagsleden during the heat wave last weekend, I decided to instead attempt to gain back my FKT on Ingegerdsleden. After all it is shorted than Roslagsleden, the terrain is overall slightly easier and I have an emotional connection with Ingegerdsleden, since is carries the name of my mother Ingegerd, who sadly passed away in November 2019. With a more running friendly weather forecast, and not having done more than 33 km of Roslagsleden on the weekend, I saw no reason for not having a go. I anyway needed to improve my self confidence and get a real ultra run into my body.

I took the train to Uppsala on Thursday morning. I wanted an early start to allow for me to complete the run during day light.

I had done a careful plan with fairly conservative pacing and time to stop for refilling my water supply every 20-30 km. I set off and tried really hard to stick to the easy pacing from start. This did not work out fully, but close enough. Also, the pacing must be seen as an average, meaning that the flat and easy parts must be quicker than the trickier and hilly trail parts.

Weather was friendly as the forecast had promised and my legs were ... well, they were feeling OK - much better than a few days earlier. I did a first stop for water at Alsike Church after 21 km, bringing out bags of Maurten from my vest and filled & mixed two bottles of energy. Most of the Swedish churches have public taps with drinking water in the grave yards (to allow for watering flowers and plants by visitors). My intention was to do the run unsupported this time. For the purpose I carried three bottles of energy drink, 13 bags of refill powder and a bunch of gels. Then I counted on using some of the churches and one or two known wells along the route. This is a pilgrim route, so it does pass by lots of churches.

Moving on to Knivsta things continued well, but when leaving the road for the tricky trail of Upplandsleden shortly after St Stefans Church, the effort started to hit my legs and especially my left foot which I wiggled a few weeks ago while training orienteering. I was grateful that Ingegerdsleden mainly consists of gravel and asphalt and not so much natural trail, as otherwise I would be in for a hard time with still 90 km to go.

Out on the road again I passed Onsala Church and continued towards the ancient village of Sigtuna, passing a number of rune stones on the way. Since I had the intention to go fast, I did not stop to take photos, but at least a managed to get on snap while passing by. As I reached Sigtuna the wind had started to pick up and I had to work against the wind as I was running (well - jogging might be a better word) along the shore of lake Mälaren towards the historical center. I continued into the medieval St. Olaf Church ruin where I stopped for a second (this is my "official" turning point in Sigtuna) before I moved out again to locate a water tap. I filled all three bottles and mixed with Maurten energy before I was on the move again, now with the wind in my back for a change. This stop took a little longer than planned, but I had been moving slightly quicker than plan until then, so I was still doing OK. Just over six hours into the run my legs were starting to protest a little and I was patiently waiting for that moment were the legs would stop complaining and adjust to the situation of taking part in an ultra long run.

Next goal was Rosersberg castle, which marks slightly passed half way to the finish. I focused on every single step, keeping the pace on a reasonable level, allowing myself some short walks here and there, all the time keeping an eye on my splits to make sure the average pace would not drop too much. I passed Rosersberg and was looking forward to starting to feel better, knowing that there was less than half the distance to go. Unfortunately, that did not happen. I was struggling. And it had started to rain. Well, the rain was not too bad. More like a drizzle and I did not mind so much, but it didn't help my mood being wet instead of dry. But despite the bad feeling, I was still doing ok for speed. I just had to work harder and harder for every step. I was now looking forward to the well in Stora Wäsby, Lång-Britas källa, where I intended to stop to refill all three bottles again. A couple of kilometers before the well, I passed Hammarby Church, but I wanted to use the well this time, so I just continued. That was a bad move. The flow of water from the well was quite weak. Plus I had to tilt the bottles a lot in order to fill them. So the process of refilling became more complicated and lengthy than expected. But at least I managed to almost fill all three bottles and off I went.

Finally it did seem like my legs were starting to accept the concept of constant movement and with just 40% left to run, I started to feel better as I was approaching Upplands Väsby. This was when the skies opened and I was soaked by really hard rain. I could probably have filled my bottles with rain water quicker than the time I spent at the well ... Anyway, the rain did not bother me too much. It did get a little chilly, but not too bad. After fifteen minutes or so, the rain calmed and my legs became nice and warm again. I decided to stop to refill my only empty bottle already at Sollentuna church, since I knew I would probably have to wait until Solna before the next public tap. By now, I knew that I was likely to reach my target time of 15:35 if only I could continue to keep my pace where it had been for a long time now. Even if the legs were still complaining a little, it had now shifted to more of a mental game than anything else. Less than a marathon to go. That is just slightly more than my average long run. I just have to put of with my stiff legs for a few more hours and then I can rest.

I managed to lose the track in the forrest of Järvafältet. I think I did that last time too. I am not 100% friends with the nagivation function of my Suunto watch, plus the GPX track is a little off in some of the place, meaning that it is normal to be a little off track. But I could see that the track was turning away from the road I was on so I had to do something before I went of too far in the wrong direction. There was no trail, so I simply had to go off into the woods and fighting the bushes and trees as I was working my way back to the correct trail. This turned out to be a slight detour, but at least I managed to keep the pace reasonably well while making my way back to the track, so I probably did not lose more than 4-5 minutes. Still very annoying. I and Suunto need to a have a serious conversation about our future relation.

Passing Akalla, I had just 30 km to go and I was still well ahead of schedule. Next I was doing the detour to Kista Church, passing lots of kids working out on the outdoor gym, playing soccer in the field and basket ball. I had to make a sharp left as I was by accident almost running into the bike/skate park. Seeing those kids, I did not feel particularly strong in comparison, but then they had probably not been doing the same things for the last thirteen hours as I had. If only they knew ...

As I passed Ulriksdal and started running along the shores of Brunnsviken, I allowed my pace to drop a little. There are some tricky parts of the trail there and I did not want to risk any accident. I had plenty of time and I was getting closer and closer to the finish with each step. Quite a few people were out picknicking or just enjoying the evening sun on the cliffs and tiny beaches around Brunnsviken. All of course with an acceptable corona style social distance maintained between groups and individuals. I finally reached the south end of Brunnsviken and made my way north along the west shore until I could turn west towards the northern cemetary. With about 9 km to go, I made a quick stop at Solna church for a bottle of water. I still had half a bottle of Maurten, since the stop in Sollentuna, but I had been running a bit low on fluids for the last hour and wanted to treat myself with a little extra for the final kilometers. Fresh water never tasted better!

As I finally made my way into the outskirts of Vasastan I allowed myself to realise that this was really the countdown. Less than 7 km to go and I was still maintaining an OK pace. I could allow myself to walk more frequently, if I wanted to. It would not really matter. Then again, it would mean it would take longer for me to complete the run. Longer for me to get that beer I had been longing for the last eight hours or so. Plus it would make it easier for someone else to improve my time in the future. Whereas I do not mind other runners being faster than myself, I do mind waiting longer than necessary for beer. So I did not stop to walk. I continued running and while turning down a long Karlbergskanalen and heading straight towards Storkyrkan in the center of the Old Town, I managed to increase my speed substantially. Due to construction work, I could not take the first bridge (Centralbron) over to Riddarholmen, but instead I had to continue to Vasabron and then take a right for a quick detour back to Riddarholmskyrkan, before I could make a u-turn and head toward the finish line at Storkyrkan. I have had fresher legs than when I was running up that final hill. I have had a fresher mind as well. But I had an all in all very good feeling. The clock stopped at 15:07:46. Almost 30 minutes ahead of plan and more than 1:40 quicker than I did in February. Setting a new FKT was really not important for me. But that does not stop me from being very pleased with the outcome of this run. It was a good day and it was precisely the day I needed.