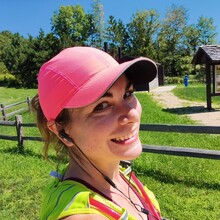 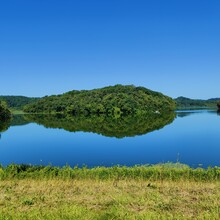 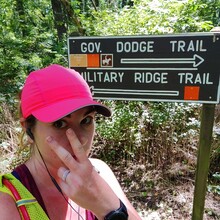 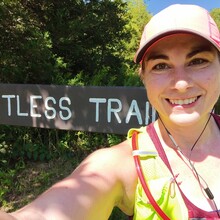 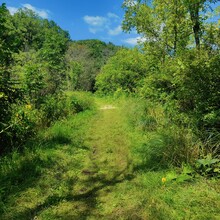 Sunday I decided to go to Governor Dodge state park (so if you do not have a state park sticker, and are going to attempt this, make sure you have one) to do two loops of the driftless horse trail. I had not been on this trail before, and the parking lot where a majority of people start is a good choice, as I didn't pass through any other lots along the way. There is a nice lake/beach area in the park, and did not go near it, I think it must be too internal like much of the camping. However, the start/finish of the loop is at a day camp for horse riders, with vault toilets and water source for horses and humans, not sure if these are turned off during the winter months.

While I intended to start around 8am, I was a bit late, and then once I was there, got a little turned around as to where the trail was/started. There was a large wooden sign above the horse unloading area/parking that said "DRIFTLESS TRAIL", a pretty good sign that is where it started. But I had downloaded the GPX into my watch and said the trail wasn't there. I wandered around for over 0.6 mile before deciding where the trail actually was. The trail did indeed start at the sign, and followed the trail perfectly from that point in a loop with signs along the way. So finally at 8:41am, I set off along the Driftless Trail from where my car was parked in the lot (right below the trail sign), which I ended up forgetting where exactly I started at the end and overshot the ending finishing AT the sign, so a little extra mileage for me, that's on me. I decided to go clockwise around the loops as others have done based on seeing horses along the trail.

The day was absolutely perfect weather for me. Highs in the low 80s, starting in the mid 60s, sunny and much lower humidity than we'd had the last 10 days or so. The morning was pretty humid, and the grass was wet making shoes wet for the first loop. Loads of larger climbs/descents, sand, rocks, and grass. I carried with me in my vest 2L of water mixed with Gnarly, all my snacks (I only ate fruit slice gummies, though 2 pack a punch with 110 calories), sunglasses I had accidentally left in there and never used, and emergency salt chews in plastic bags. I carried my own phone and ipod and my car fob. I put sunscreen on before I left the car and wore calf sleeves which was 100% was worth it when the grass was overgrown in places. I could tell the back half of the loop had not been touched/maintained as much as where there was access to parking and other trails.

The first half of the trail is a mixture of woods and prairies, with a campground shortly after starting out which also had bathrooms and a water faucet. A family was camping there and awake making breakfast.

Half way through the loop (7.2 miles), there is a sign for the access trail to Military Ridge State Trail, the first FKT route I attempted unsupported. This felt special to me. I reached this point about 1:32 into the run. Half way through the back half of the loop, I met my first group of horses. I had met a group at the day camp at the start with horses and asked what to do if I met horses. They said they would let me know, and do not hide and make yourself seen and stop. I followed those instructions and came to a stop until the horses had passed and walked away quietly as to not cause startling to the horses. This was a bummer, as the humidity started burning off and I was heading downhill past Steven's Falls parking below (no resources, and barely any parking), cause I was feeling better at this point and kind of messed with the flow. My watch typically falls short of the distances I'm going and gives more gain than it should, so I had no idea where I was in the loop at any time. The last 25% of the loop was a bit more runnable at pace. It was at this point I decided to do another Clockwise loop instead of doing one in reverse like the male FKT holder did (one CW, one CCW). Though I like the idea of switching it up, with something like this, I'd rather know I have some decent running in the end to look forward to.

At the end of the loop, My watch came to about 14.6 miles total, with no getting lost or anything off course. I reached this at approximately 3:05 which was slightly behind one of the 1-loop FKTer so that fueled me mentally a bit. My car was right there, and I continued to go unsupported. What did I miss by doing this? I left hydration fuel I could have used badly (looking back), sunscreen, anti-chafe product, change of socks/shoes, fuel besides the gummies (I knew I had a soda in there), and extra water in case I decided to drop to self-supported. I used a spigot to refill water (in hopes it was clean enough, and it was) there. Off I went to the 2nd loop which would be a lot slower. I could feel the wide spot on my back having been rubbed. Nothing to do about it now. The first half of the 2nd loop felt ok, the grass was mostly dried out, and my sleeves saved me from a few close encounters with wild parsnip along the trail. I encountered 4 more groups of horses which I had to stop and wait for, one actually going my direction which ended up being tricky and had to go behind them until they could pull over and let me pass without spooking the horses.

About half way through the 2nd loop, I realized I was running out of water already. I started power hiking more and thought I saw a building a bit off trail along the way I could find a spigot of, but had zero confidence there would be one and I could not for the life of me remember where it was along the trail in the last 7 miles as I thought it was in the first 7! I could tell I had slowed down trying to conserve my resource. There was a natural spring house at Steven's Falls, but I bet that would take me a mile round trip off trail. Eventually I stumbled upon the building, which was the building the state park staff used to check in cars to the entrance of the park! I hesitated because I don't think that kind of building would have something there. I took the risk and went for it. I was indeed rewarded, and took water from there. Oh the looks I must have gotten stumbling out of the woods in front of the cars entering the park! With about 3.5 miles to go, I headed out with a better pace.

I encountered two more groups of horses (I never encountered just one horse, but usually 3-5), and this one I took a blind corner and spooked the horse a bit. I felt bad, but neither of us could have avoided the interaction. It took a few minutes for them to let the horse settle down and eventually pass me. I also passed two young men who were lost. I stopped to help them find their way back to the trail they came from and their car using their map they had. Final two miles, my legs started to cramp up. I took my emergency salt chews, but it was probably too late for them to be of use. I also realized that the cheapo plastic bag they were in let my sweat in, so that was an experience chewing them. Bleh. My dehydration had indeed caught up to me though. I pushed on to the end which the trail end is very sandy.

Considering I forgot where I had started exactly and didn't want to waste time looking at my watch to figure it out at this point, I just headed to the DRIFTLESS TRAIL sign and stopped my watch at 6:34:10. I did overshoot the end, but better overshoot than be short. Ironically, there was one hiker out there I had met somewhere on the first loop. I had also met him somewhere on my 2nd loop. And about a minute or two after I finished, there he was, and popped out of the woods. I got to talk to him and he asked how many miles I did. I told him and he said he did just the first loop, but hung up his hammock and had a good time! I laughed and said I had wish I had my hammock too! I asked him if he would get a picture of me there. He accepted :)

Overall this is an excellent training loop for just about anything in the midwest. Although lacking true single track, the trail is still rather technical in a lot of places and the amount of hills was surprising. I'm still glad I went unsupported although it was tough still, especially when your car is right there. I easily would have suffered less with the aid I had in there, and probably faster had I had more salt. I will probably return here for just regular training soon and maybe not two loops haha :)