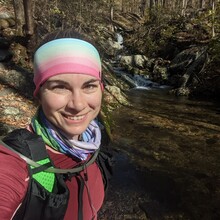 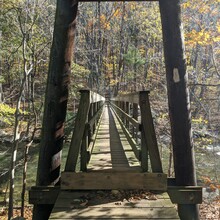 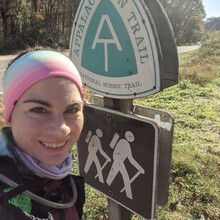 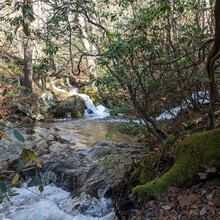 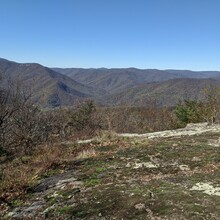 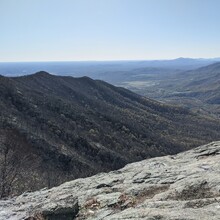 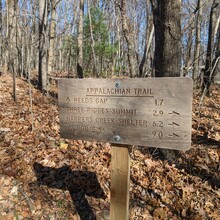 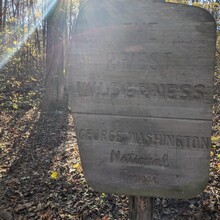 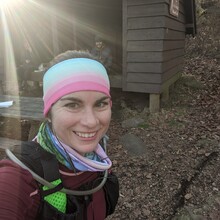 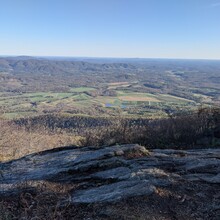 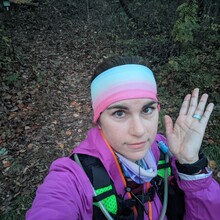 On Monday November the 2nd, 2020, I arrived at the Priest and 3 Ridges Parking lot (no cell service!) to start my unsupported attempt at the FKT course using the route and directions used by those before me. I still cannot say with confidence that direction is the most optimal given the route...both sides, the loop and the out and back had its positives and negatives now I have perspective. I had never been on this route before, hiking or otherwise. I began around 9:58am on a blustery and chilly morning, around 37F at the start, but very sunny! Without the cell service, I was unable to start up strava beacon or use the route I had downloaded for the GPX file. I had created my own using Garmin Connect Courses prior, though this later ended up serving me well, it also added mileage. I was grateful to start the course using my Fenix 6 watch and off I went doing the 3 Ridges CCW. The suspension bridge was one of the best highlights and not even far off the trailhead. The trail headed straight up as expected, though not too technical. I reached the sign where I would follow the AT until I came across the Mau-Har Trail. Though the trail went downhill for a short stint, it quickly returned to climbing. I tried to ration my water (I carried 2L in a bladder), and had a snack every hour. The first hour I ate some skittles from a Halloween packet. The trail became quite rocky and technical for a while, then returned to the climb. I encountered 2 thru-Hikers of the AT along this side.

Nearing the summit area, I could see changing leaves near the base of the mountains. Ice rose up from the ground, though the ground was dry despite the tropical storm that had passed through before the weekend. The wind cut like a knife however, howling through, only interrupted by a fighter jet overhead! I encountered a large group of women picnicking in the middle of the trail at the top, I met them again almost back at the parking lot on the way down. I soon encountered 2 male day hikers of the 3 Ridges loop going CW. Had it not been for them, I would have been wandering around this particular area for more than a few minutes. I got a bit lost with the views and so many off shoots of the main trail leading to more overlooks in the area with no clear blaze around...harder to see with the lack of leaves. I got lost one more time around another overlook (in one of the pictures I am including actually), I got turned around somehow and referred to my garmin course map to get me back on track. It seems I just went in a circle, circling back to where I had just been. Just so many foot traffic offshoots of the main trail again here.

Heading down I met a couple hiking up CW looking for more views. They had two large white dogs with them. I was so glad to go down, but it was steep and only slightly technical. The main issue started becoming the ankle deep leaves and mid-sized rocks. I kept thinking I could be faster had I more confidence in where I was stepping under the leaves. I came to the intersection where I was to turn on the Mau-Har Trail. I overshot it by not much mileage (went to the sign in the area and saw a possible anti bear cage set up?). I eventually figured it out but it seemed there was a lot of dispersed camping which made the main trail tricky to follow overall. I kept referring to the garmin screen for compass. I had my mini packaged cupcakes here (180 cal!). The single track was well maintained, although a few fresh downed trees was to be expected with the days of high winds, including this one. The trail continued down, and getting more and more technical with more and more difficult footing. With the recent rains, the streams were overflowing, it was impossible to stay dry with constant crossings and bad footing on moss covered rocks. The trail got pretty creative with a few rock scrambles, and normally had this been a training run or something more relaxed, I would have enjoyed this more. The constant waterfalls were amazing, but wondered if I would have noticed more going CW on the loop instead of CCW. The trail then started to rise quickly around mile 9.

The trail returned back to where I had come from at the intersection of the AT. I took the right turn to go back to the parking lot, with 2 nice downhill miles with less leaves. I had eaten a small packaged snickers on the way down. I was much slower than expected and constantly feeling my pack. This was my decision point of whether to continue unsupported or refill my water for the rest of the route. I decided against and kept with what I had to continue on unsupported. I made the quick decision however to take a quick potty break between the cars trying to be discreet as possible. I then headed up the Priest. I noted the parking lot was as plumb full as when I had arrived!!

Up the Priest, it was mostly densely packed with fallen leaves, the grade was not too bad. I did think I had enough water to last me the rest of the hike. The parking lot put me at 13.6 miles GPS (even with "lost" mileage added), though heard it was supposed to be 14-14.6 miles. I was optimistic about how short the Priest would be in comparison to the 3 Ridges. This was not a good assumption. I crossed a few streams heading up, noting how far I was from the parking lot. The first major one seemed to be 1 mile in (and used that to mean I had one mile left coming down and to push it). The leaves were so dense! I knew I was on a short time since I had to beat sunset. I had interpreted the mileage to be about 7 miles out and back total. I felt like I had plenty of time!

I hit my lowest point at mile 16, probably because I was rationing the food I had, having only gels on me left. I shot a gel and drank a little water (my water did have tailwind). I saw what I assumed was the summit of the Priest in the distance, and looked at my watch. I thought I would be there at 17 miles, but I was at 17 miles now...how much further...this looked to be far. It took another mile and one more view of the summit from afar to reach the turn around. The top was long and the last mile had been very rocky. The wind was still high up here and took away a lot of my warmth and my hands started to freeze and I did begin to worry a bit. I put on my jacket I had been carrying on my waist this whole time and that helped a lot. Next time, just bring a beanie in case.

I had been using Strava as a back up (data lost now), but had to shut off my phone because my battery dropped like a bomb and now I wasn't sure I had enough sunlight to make it down. I did not bring a headlamp on me. I encountered one more thru-hiker on the way up in an orange blaze hat. I desperate turned on my phone when needing pics, and sending texts to my husband to tell the world I was ok, but also trying to confirm the turn around point thinking I must have gone too far. Kate, who did this before me, had said the turn around was at the sign to the shelter, but I couldn't load the conversation, nor could I load the FKT site (no cell data still and a failing phone). I did not want to turn around too soon, so I proceeded to the shelter itself at the top which was down a small hill. I met really nice set of 2 more thru-hikers ready for the evening. The offered me food and water, but I declined and they understood. I still thought I had enough water somehow. I took my picture with/of them and started frantically down the mountain. I met the thur-hiker again coming up towards me and wished him well. I was in a mad dash down. I tweaked my bad knee and it hurt my time. My foot was cramping from lack of water and salt. I had drained my water supply.

The sun was setting and although it was easier to see the ground without the filtered light, it was harder to see in general without the light. Double edged sword. The leaves were so annoying now, every step was with caution and I held my abs in tight. I couldn't let my mind slip for one instance...every step mattered, and every foot placement had to be sure-footed. I made it back down shortly after sunset, with very little ambient light left. My sister had parked to meet me to make sure I made it down ok since I had no cell service. It took 7 hours and 29 mins. I had two garmin watch pauses when I had grabbed hold of tree and my wrist bent back and accidentally paused my time. I included the paused time. Strava says I was a bit faster than my watch time, but I don't know how much I trust that.

This was way more technical and harder than I had imagined. I did not pick a very useful day, the coldest and windiest I had felt in several months despite being from Wisconsin now. I'd say with less leaves and more tolerable weather, this probably can be done better (and less time being lost! and turning around at the shelter SIGN and not going too far to the actual shelter!!). Not sure how much water would be directly accessible for filtration under normal water flow/circumstances. This really was an adventure, and more than I bargained for! I would say it ran like a 50k, but I just ran a 50k and this was twice as hard as that one was!