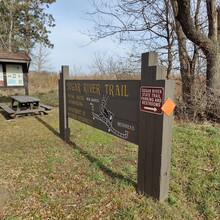 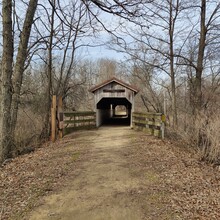 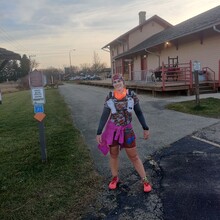 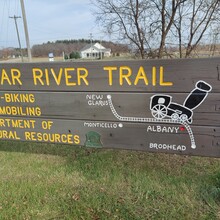 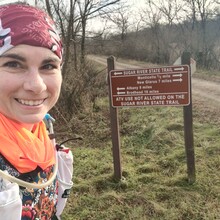 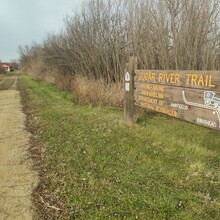 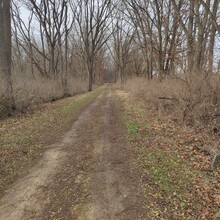 Started the run at the location in Brodhead at 11:49am on a very windy day, roughly 60 degrees, warm enough for November. My husband dropped me off and left. I carried 2L of water and tailwind mixed in my hydration pack. Exposed areas of the trail made running difficult into head and side winds and hurt my pace. I had a gel at mile 4 (it was not very tasty), decided I needed more a mile later and ate a small snickers. I had many ups and down, dealing with female related issues in full (but did not cause me to stop). Pace was everywhere and so was heart rate....some of it due directly from the wind. The trail was moist to wet in some places unexpected since it had not rained to my knowledge that recently, and the wind should be drying it out.

I refueled again at mile 9 with another gel (much better). I wore a blaze orange buff because hunting was open on the Ice Age Trail Section of Sugar River (also known as the Albany Segment) and saw a few hunters gathered on one of the road crossings, one from PA. Heading towards Monticello, I was scared by one snake on the trail and about 3 pheasants that flew away as I ran by. Feeling up my bladder, I was starting to run low. I broke into more walk breaks to conserve and ration the water I had.

Upon reaching Monticello, I tried to find some water nearby, anything, and although there was a restroom, water was not to be found. Most water along the trail are farm runoffs, not too safe to drink! All I could think about is water. This slowed me down immensely, as I had to make it to the northern terminus before getting more. I ate some skittles I brought along and another snickers around mile 15. Past Monticello, there were mile marker posts that counted down to the terminus very accurately with my watch distance. Developed a blister somewhere, sometime late in the game I started to notice with 4 miles remaining. Winds died down a fair bit towards the end and followed the paved path into New Glarus where I stopped at the parking lot and trail head. Wasn't a fantastic day, but blazing a new trail is never without difficulties and learning my water demands are much higher than they used to be a year ago. I was not able to find water along the trail.

FKT Route notes: I submitted the GPX file for this trail, but after I learned the southern terminus sign is about 3/4-1 mile further south on a street road from the trail head sign and the trail head GPS coordinate according to garmin and google maps. There are no trail markers but there is a sign pointing you to the direction of the parking lot for the trailhead (it's odd they are about a mile apart). Looking around the place I started, there is no indication the trail continues further south, again, with the exception of a sign pointing south down a street. I followed the GPX file from start to finish however. The DNR has the trail listed as 24 miles, though even by their values is too far a distance, but closer to 23 would be more accurate if you counted the street to the parking lot; 22 miles more accurate if you did the trail portion like I did. The DNR map is very unclear where you would start at the southern end, though it's very clear for the northern end. Just wanted to be honest and up front about this key detail, though I am not sure what the verdict should be here.