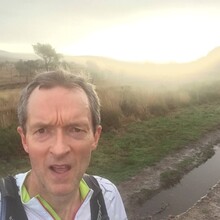 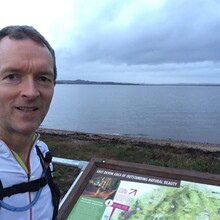 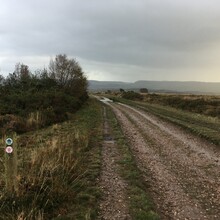 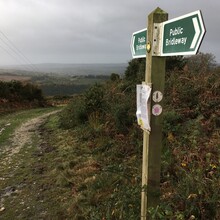 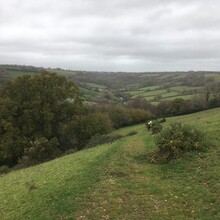 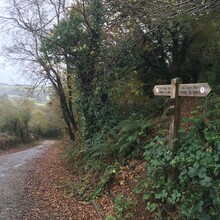 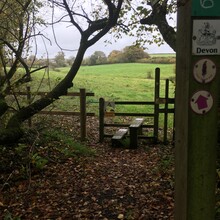 The weather forecast earlier in the week had been for torrential wind and rain, but it was the only weekend I could do it, and thankfully on the day it was fairly clear; just a bit of wind and an hour of rain. I had previously done the route East to West with a group of friends as a social, which took us 14 hours! So I had always fancied having a pop to see what time I could do by myself. I live locally and often run parts of it. There are some fantastic hills, valleys and views in this part of East Devon, so it's well worth taking in parts of it at least. This time I did it West to East due to the wind forecast, although it wasn't that strong in the end.

As for today, I got up early doors and before heading to Exmouth, dropped a couple of 1.5 litre bottles of energy drink at approx 20k and 40k points before setting off, one at Aylesbeare Common, and one just outside Church Green. It was peaceful on the Estuary when I set off from Exmouth, just a gaggle of birth watchers there to see me off! I had decided to try and run at around 5 min/k for the 'easy' miles to give me some buffer for the hilly ones later, and try and break 6 hours. I thought I was well on track for that, and thought maybe 5h30m was on the card, but I had underestimated how difficult the 45-55k section would be. It was the only bit I hadn't recently recced and not only was it hillier than I realised but also very soggy fields to negotiate. I also lost a couple of minutes trying to work out how to get around a tree that had fallen and totally blocked the path just before Muswell! There were some gruesome dogs on the last major hill before heading downhill towards Uplyme, but thankfully ignoring them worked, and no bites received! The last couple of downhill miles and riverside stretch into Lyme were such a relief but I had to work hard on them as I wasn't sure I would break 6 hours, but thankfully I did just!