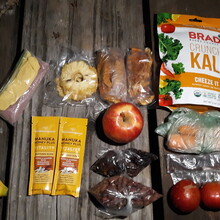 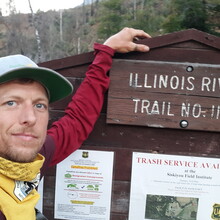 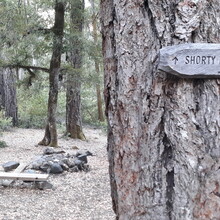 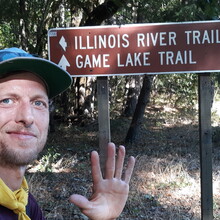 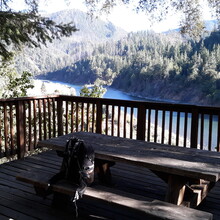 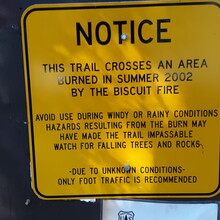 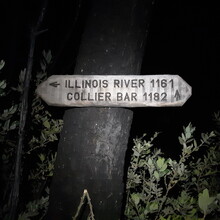 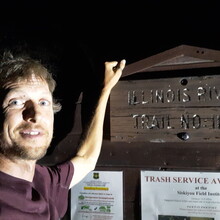 For this unsupported Out & Back solo mish, I camped the night before at the southern end of the trail, at Briggs Creek Trailhead. Well, sort of. Shortly after arriving, I realized I'd forgotten my portable power bank. So...after a 2 hour nap, I drove 2 hours back to town to go get it. By the time I had returned, it was time to start getting ready, which for me, also takes about 2 hours.

At 7am sharp, I departed and within minutes realized this was not going to be a very fun journey. Poison oak, thorns of a dozen varieties, and the impacts of erosion greeted me.

I tried to run but couldn't.

You see, in 2002, this area was severely destroyed (scorched down to the bedrock) by the Biscuit Fire and this trail was never fully repaired. Along the way, I climbed over or around dozens of massive downed and blackened trees, needed my catlike agility to surpass several steep washouts that loomed precariously above the river (and would've turned some people back), and for many miles the trail was carpeted in thin but thorny vines that would catch on my shoes then rip into my ankles as they tripped me.

I reached the far end just shy of hour 10, 4:58pm, then took a long break at a picnic table that's perched over the Illinois River there. At 5:30pm, I headed out, dreading more thorns but looking forward to a deep swim at a particular spot.

On the way back, as night fell the wind increased and was sporadically gusting quite strongly. From atop Bald Mountain ridge, the cool air felt great against my skin but in the valleys below, I could hear trees toppling. Big trees!

Thankfully, cold water, macro-navigating the route, and finding good resting spots directly along the trail were never an issue.

Additionally, I think this trail could, for the most part, be restored rather easily. Should that happen someday, I think I could cut this time in half. Like a burnt snag in the wind.

Until then, gaiters and long pants would help tremendously but probably won't keep you from getting tripped-up by the vines.

Yeah, you're probably better off just going somewhere else and leaving this FKT here for me to hang onto. No need in both of us suffering. Right? ?

Aha, I was waiting for an innocent victim to be suckered into it.

LOL. Yes it's not your typical groomed trail. That's what I love about it. This trail is actually in the "restored state" believe it or not. It sees very little traffic because of the access. I was a firefighter on the Biscuit Fire and spent a lot of time in this area back then.  Also major portions of the trail impacted by the 2018 Klonedike and 1987 Silver Fire. There is a fair amount of history and background that goes along with this trail which I plan to blog about later as part of my attempt.

Thank you for suffering through it and putting up a GPS track. When I did it in July, I messed up the recording. Since it was just a reconnaissance mission for a future attempt, I didn't really care. 98 degrees is not the ideal temperature to make an attempt on this one, that's for sure.

Nice! I've been wanting to do this since before the fire, I was the sucker for not doing it back then. This hike actually gave me the confidence to go for the Hells Canyon R2R2R, because I knew going in that I'd already gone further, higher, faster. So thanks for that, and I'm sure you guys have put in tons of work restoring these trails, year after year. I hope this one gets cleaned up a touch more though, but the wild feeling of it is cool too, and it's a good showpiece of what wildfire can do a landscape.