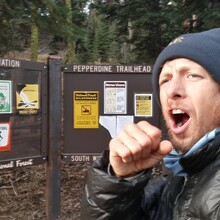 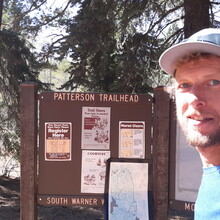 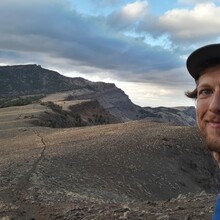 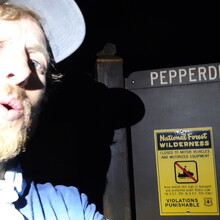 For this out & back solo run, I camped the night before at Pepperdine Campground, the easier of the two ends of Summit Trail to reach, or at least it requires less traveling on dirt roads to reach. After a successful north to south crossing, in 5:12:30, I enjoyed a 15 minute break at the vacant Patterson Trailhead then began heading back. On the return, what was a tail turned headwind. Even though it's 500 feet less elevation gained traveling south to north, the breeze had quite an effect and slowed the return trip to 6:15:55. That, and it got dark on me while I was still a few miles out. I finished under the glow of my headlamp. The sunset was long lasting and the views along this crest were nothing short of spectacular, with forested mountains of the cascade to the west, and dry desert mountains of Nevada to the east. In part, I completed this route as an out & back since I was traveling alone, and because it's a long way around by roads to ride a bike or to hitch back to mile 0. You buying that? Didn't think so. I traveled this route both ways because as a whole, this is an incredible trail with runable grades and tread, social distancing like you wouldn't believe, and views that are truly worth seeing twice. Someday I'll return to this route and explore it at a much slower pace. And maybe with company!