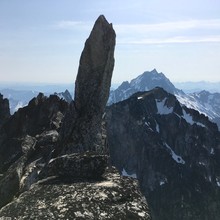 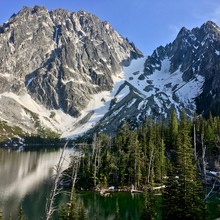 Starting at Colchuck/Stuart Lk TH run the trail to Colchuck Lake and around the south end of the lake. Climb Aasgard Pass and ascend the snowfield on the eastern slope of Dragontail to the saddle dividing the Enchantments basin to Ingalls Creek. Ascend the ridge to the summit.

Tried for a few years to break 2 hours on the ascent. I was able to shave off a couple minutes and finally went under 2 hours in 2017. Stayed at the summit for a minute and then descended at a steady pace. Carried one hand bottle and a straw water filter. Stopped for water briefly on both the ascent & descent.