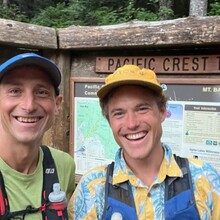 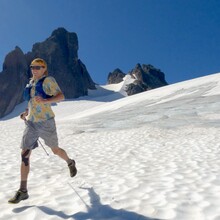 Michael Hutchins & I set off on the ALCT around 6 AM on Aug 17. We used the Pacific Crest Trail for the first two miles instead of the Commonwealth cutoff.
Neither Michael and I had run these 11 miles on the PCT, so it was nice to experience it in the morning light. Cruising past Ridge Lake, we stirred up an underground hornets nest. Michael cruised by unscathed, but I took a few stings to the legs. I’m not allergic, so we kept on and climbed over the shoulder of Chikamin.
After a few climbs, and not being able to keep food in, I wondered if the daycare bug I had picked up from my toddler was something more serious. Michael offered to turn back, but I thought perhaps I could “run it off.” We continued on, but I had no energy on the uphills.
Miles and hours passed. Marmot whistled. Frogs jumped into snowmelt streams. Smoke plumed from the fires along the Little Wenatchee and White River.
At the Dutch Miller Gap trail, I was feeling sick enough that we were talking about ways to get out. No exits made much sense and at this point in the traverse it seemed best to just slog it out to the car. A half mile later, I swam in Williams Lake and felt refreshed and then started the climb towards La Bohn Gap and Hinman.
As the day went on, the cumulative fatigue from not being able to keep down food was taking its toll. My attention shifted from taking in the views of craggy peaks to my eyes turned down to my feet. The normal feelings of peace from being in the mountains was replaced with achy pain throughout my body.
Michael indulged my request for another swim stop in Pea Soup Lake. Ten minutes in the company of icebergs jolted my body back into movement.
The next climb up the Lynch Glacier toward the summit of Mt. Daniel was painful. My head throbbed, my heart raced with strange palpitations, my pelvis, spine, and lungs hurt. Halfway up, I knew there was cell service, so I called my wife to let her know how it was going, and that it was going to take a bit longer than expected to get out. When I talked to her, I found out she had just tested positive for Covid that morning (I would test positive the next day).
The next thousand feet crawled along as I double over on my trekking poles, taking baby steps up the glacier to the shoulder of Daniel. At the top, I told Michael to go ahead and run the 100 yards up to the summit while I starfished on the ground trying to catch my breath.
Michael returned and we walked down to Peggy’s Pond where I waded in with all my clothes on, hoping to reset myself so I could finish the final miles.
Once we hit the PCT I felt like I could move a little quicker than a walk so we jogged down to my truck at the Cathedral Pass TH.

*thanks to https://climberkyle.com/2019/06/30/the-alpine-lakes-crest-traverse/ for the inspiration for this line. Michael & I didn’t stay glued to our phones to check whether we were ‘on route’ for much of it. We wanted to let the terrain dictate our movements. I think the absence of snow made for some different route choices too.

THANKS:
to Michael for being a great parter and for your patience with me throughout the day, and to Jenny Abegg for the car shuttle and prodding us to do this route, and finally to Ely Gerbin who told me to check out this zone while we were in the Pickets.

NOTES:
-this was Michael’s first time wearing a running vest - my nutrition plan worked out to be: two gels, a stroopwaffle, some Newman O’s, and huckleberries–amounting to ~60cal/hr. Not recommended -after taking Covid tests for every sniffle and cough the past two years, I didn’t jump on it this time. I wish I would have taken a test before going out on this trip