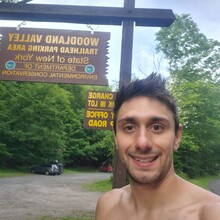 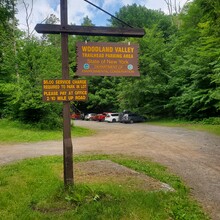 The morning was cool with a relatively low dew point and humidity, maybe lower 60’s. After waking up from a secret van spot I quickly prepared my pack, fuel, and hydration. I then put on some leuko tape in a stirrup style on both sides of my feet along with darn tough socks. On my 20 min drive over to the Woodland Valley campground I ate some oatmeal with 2 crushed oreos in it because I forgot to bring dark chocolate. Maybe not the healthiest but really revs up the engine.
I arrived to Woodland Valley Campground and assembled my kit. I took about 15 minutes to warm up by running on the road and performing a few strides.
7:35 a.m. start was enough time to beat the potential rain coming around 10:30 if things went smoothly. Gave myself yet another self countdown from 10 for the fkt start. The climb to Wittenberg was long but surprisingly runnable for a lot of it until I hit the upper 400ft. I felt pretty good on the climb surprisingly since I had done an easy but long effort of 29 miles the day prior. There are a few sections of massive boulders you have to climb, but most have roots to grab. I made a small navigational error going off trail for 50 feet after climbing a boulder and quickly found the trail. The leaves are so green and the trees were so full.
I attacked the descent off Wittenberg and rolled into Cornell's Crack. Descending down the backside of Cornell feels longer than it should with its odd windy, rocky, rooty, riverbed-like style. It’s a fun rhythm to get into though that creeps you up to Slide Mt. Summit. There are few ladders you have to climb to get up, my only issue was whether to skip a step or use every step. I alternated, skipping a step was super taxing on the effort scale.
Now the really fun part of the route! After ascending 3,500 ft to Slide, the style of running changes into faster less technical downhill running. Talking about wanting to light it up, I ripped it past 2 hikers, yelled “behind you,” “excuse me,” and “thanks” as I passed. Don't we all wonder what the hell they're thinking. Like, what is he doing, or how sketchy is that, or holy shit that’s insane, or why cant you enjoy the trail, or I want to know that guy. The list continues but back to the descent. The buttery smooth almost west coast vibe upper section quickly turns into its Catskill self. Throwing its big sharp and jagged rocks in your way and forming a dried out river bed look. I eased up a percent or 2 with thoughts of what was ahead. The dreaded 1.9 mile road section that starts slightly uphill and only gets steeper. The final mile on the road is downhill. I didn’t feel up to smashing sub 5:30 pace like a few of the other gents did en route and did what felt smooth.
After 13 minutes of pavement, I hopped on Phoenicia E Branch Trail to tackle the rest of the route. My climbing legs weren't as peppy but I still felt good. My fueling was dialed in though allowing me to maintain the pace I desired. The trail is mostly runnable with a few uphills left where I was forced to hike momentarily. Seeing the sign with 2.7 miles to go until Woodland Valley Campground was a relief.

Mostly falling downhill to the finish line I thought, except I had forgotten about that last steep punchy climb with about a mile to go. I shook my head and power hiked in disbelief. Now just a bit more flat rooty running into the last final descent. I smashed the remainder with all I had left, hopped down the final stairs and hammered 4:30 pace to the sign.

Looked at watch with a smile on my face, another Catskill FKT on the resume. Josh will come back one day after hes done romping out west in Durango or maybe some new young guns will throw down on this ultra classic loop. I definitely would love to see the Northeast gain more traction in the FKT scene.