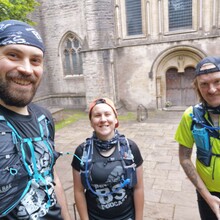 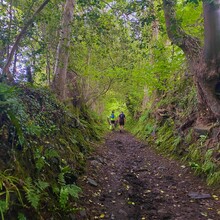 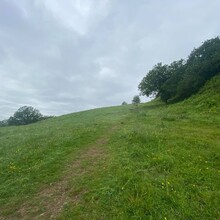 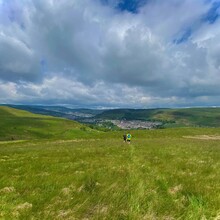 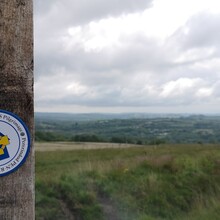 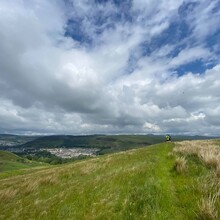 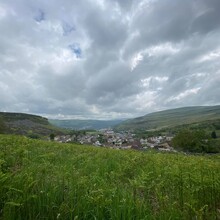 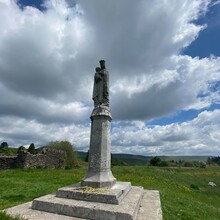 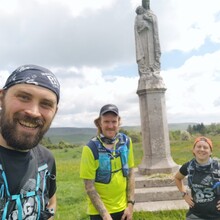 After much planning and delaying, we managed to organise ourselves sufficiently to make an attempt on this route. It is a relatively new route, and we were excited to explore some new trails and parts of the South Wales Valleys we didn't know much about. We started under the impressive facade of Llandaff Cathedral at 7am on a familiar section through Cardiff. This quickly got us over the M4 and into the trails, which were uncharacteristically dry, but there was plenty of running through fields and grass which meant our feet were wet from the early stages of the run.

We skirted the village of Pentyrch and through Creigiau which make up the very outskirts of Cardiff and over what we discovered was the 'Boundary of the Ancient Borough of Llantrisant', which was marked by recently erected stones and plaques. We found some steps up to the top of Llantrisant to find a church and Guildhall from 1346, and onto the cobbled streets of the town centre, which was a complete surprise to us. We were quickly back out onto country roads, passing cattle and horses on either side (and sometimes in the road). The remainder of the route was field edges, woods and quiet country lanes, and through village of Trebanog.

It was here that we started to see some extremely steep hills poking out from behind the houses and we started to worry which of them we'd have to climb! Luckily the route up wasn't quite as direct as we'd feared but we were soon into open common land with only a single trail marker on a post which appeared to be fairly randomly placed on the top of the hill with no obvious paths or trodden grass leading to or from it. We lost around 15 minutes double checking maps to figure out where to go, but eventually found our way to a small stile previously hidden behind a small rise. Thankfully this led downhill, through a group of curious friendly sheep and into a farmyard.

From here navigation was much easier but the terrain was not. We reached the edge of Tonypandy and hit a long set of steps, which led to a steep street, which led to a steep service road alongside a cemetery, which led to an even steeper grass and fern covered hill. We indulged in a bit of a sitdown here, before heading up to the top and a gravel road across a golf course. After dodging (quite literally) golf balls being teed off in our direction we even managed a small run to the base of the Virgin Mary Statue to complete the route. It was lovely to get out of the city and be so cheerily greeted by local walkers, who were all interested in where we were running and offered us encouragement.