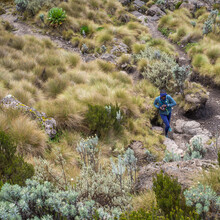 I was attempting a women’s record for the fastest time running up and down Mt.Kenya’s summit from the Park’s main gate. My distance for the entire run was 48.73KM, and my elapsed time was 7hrs: 50mins: 08 secs. I had a target of finishing in under 8 hours. My first indication of the under 8 hour possibility was covering the first loop of 9KM (elevation gain of 648m), in less than 1 hour. I had also hoped to get to the summit in under 5 hours, and I did. I was lucky not to get lost as I just went after the footprints from 2 of my male friends who were also chasing the fastest men’s time. The last kilometres were a bit intense, I had moments of throwing up more than once. Several slips and falls. Actually, speaking to my friends, there seems to be one spot where we all fell down during the descent. Someone, a hiker maybe, must have dropped a pen. I saw the pen, one of us saw the pen’s black lid, slipped and fell a few metres ahead. The third person (Kenneth Kemboi) fell down, touched the pen during the fall and picked it up to the finish line.

It had been a few tough weeks just before this attempt. Having had 3 of my chewing teeth removed, I contemplated trying it another time. But again,if I missed it this time, I was not going to have the chance of attempting it with friends and get the much needed morale. I feared suffering a bloat during the run, so I didn't plan on eating during the attempt. I took the chance to eat decisively the previous night. In terms of water, I had spent the past few days hydrating as well.