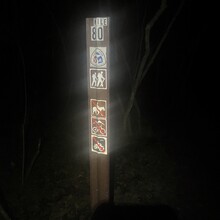 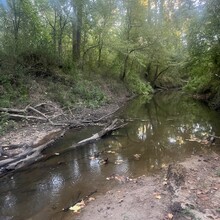 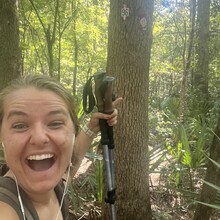 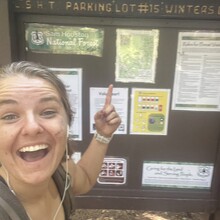 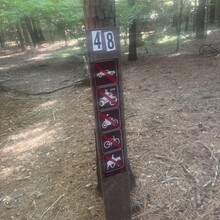 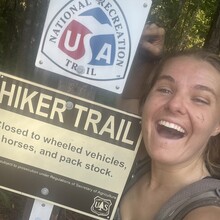 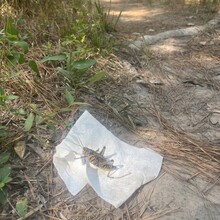 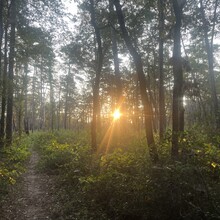 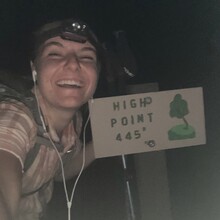 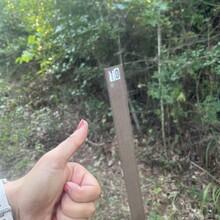 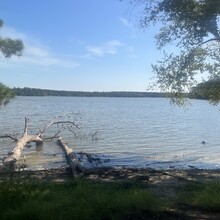 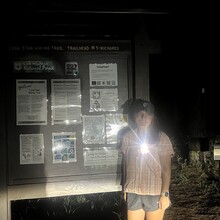 At 5:44am, I began hiking east from trailhead 1. I was hoping to get some miles in while it was cool and dark still. The trail was really nice minus all of the spider webs I was running into. Just shy of 20 miles in I stopped at the campground to use the bathroom, eat lunch, and get water. Not too long after the trail entered back into the woods, the trail takes a sharp left. I didn't notice and continued straight on a defined trail. Almost a mile in the wrong direction I realized I was no longer on trail and turned around and walked back until I returned to the spot where I had originally gone the wrong way. I got some water at a shallow sandy creek just after mile 33. It was time consuming but decided to eat dinner while I was there. I hiked another 7 miles and camped at mile 40. I arrived just after 10pm. I was tired and chafing from the humidity, but feeling ok nonetheless.

I woke up the next morning and began hiking a little before 4:40am. I hiked about 6 miles and took a quick nap. before continuing on. Nothing too eventful happened during the day. There were several road walks. I saw a few dogs here and there, but they just barked and were not aggressive. I got water at the pond around mile 51. It wasn't a very clear source, but it as safe. I carried water from there to the lake at mile 75. I arrive there around 8pm. I filtered water, ate dinner and slept for about 3 hours. As that day progressed, I began to chafe worse, behind my knees were getting tight and my feet and ankles hurt. I tried to tape them, but I knew it wouldn't be a complete fix.

I began hiking again a little after 11:40pm. I hiked a dozen or so miles before trying to get another hour of sleep before pushing to the end. I carried enough water that I didn't have to fill up again before trail head 15. While I was so sore, I pushed through to the end and finally arrived at the trail head at 10:14am, just over 2 days after I started.

Overall, I typically would leave a water source with 4.5L of water and I only stopped to fill 4 times on the entire hike. Since the trail was so short, resupplying was not an issue and I carried the food I needed for the entirety of the trail. I didn't run any of the trail, but tried to keep a consistent pace throughout the trail and sleep in short increments when I was tired. The trail was actually really beautiful and the shade from the trees were much appreciated, making the still very hot days much more bearable.