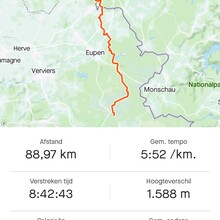 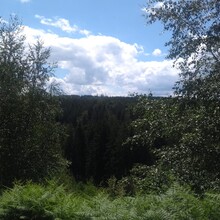 This is the out-and-back variation on the route. I started in Vaals, ran up to Signal de Botrange and then returned to Vaals again.

I did the route solo. Since I have the FKT on the single route, I was pretty familiar with the terrain. The track is very fast in the beginning with smooth forest roads, gradual climbs and broad country roads. There's quite a few concrete stretches as well. Alltough I felt rather strong, I was very carefull not to start too fast. Because after Lac d'Eupen there's a long climb up to the Hautes Fagnes.

Even though we're coming out of a long drought, the Hautes Fagnes were still boggy enough. I experienced very difficult and unsure footing for a lot of miles. During my previous FKT attempt, this terrain nearly killed me. Luckily this time I was mentally prepared.

I planned to take 1,6 liters of water and suplement this with water I would filter from the streams, which I did. My plan to go totally unsupported, failed though. Near the end of the route all streams were either extremely muddy or completely drought up. So, I decided to stop at a restaurant at the half way point to have a coke or two and to refill my camelbag. This way I 'lost' about 15'.

The way back went slightly more difficult. I needed a few little breaks and lost some time over a lost cell phone at a restaurant break (I had one more coke and a water refill). Still I was able to keep up with my goal pace.

In the end I had to ascend too the highest point of the Netherlands again. My legs were fried and my energy low. The virtual finish line came right in time.

All in all I had a very good experience, I enjoyed the rapidly changing landscapes and our beautiful nature. I was also able to keep up a decently steady pace.