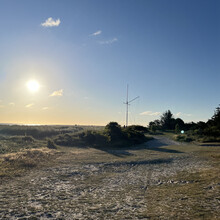 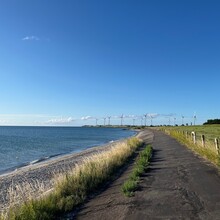 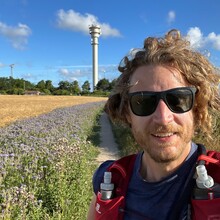 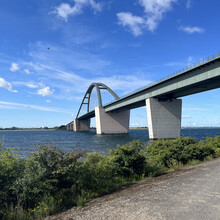 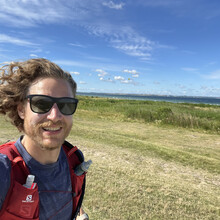 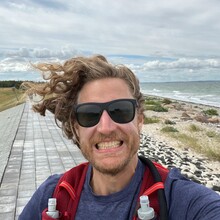 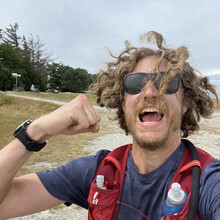 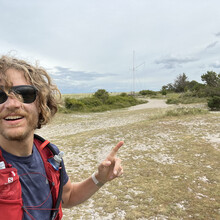 Absolutely stunning island, great day for a run around it. Temperature was around 15 to 18C, but the wind was harsh at times. I’m not too sure I took the best possible direction (decided for going clockwise), but I figured having tailwinds on the first 20k and last 10k would be better than headwinds on the first 10 and last 20.

The goal was going fully unsupported, so my backpack was heavy and I was on the lookout for public and non-commercial water sources all the time. But up until around 50k, nothing. There, I found a water tap next to a marina, perfect! If it hadn’t been for that one, I would have needed to buy some water and move "down" to self-supported. But this way it all worked out pretty well. My pace suffered quite a bit during the headwinds sections between 25k and 55k, up until the point where I thought I wouldn’t be able to make it within the FKT time, but the last 10k with tailwinds turned out to be really helpful and got me there with just a few minutes to spare.

The route is very relaxing, I’m definitely recommending going for an FKT try here as well. My time shouldn’t be too hard to beat, especially on a day with less winds. I would recommend going in spring or fall, when the temperature is around 10C, but I think the winds are quite unpredictable during all the seasons.

The track itself is very runnable, just a few short bits here and there (maybe 5 kms in total) are rather overgrown at the moment, but leave no bloody traces on the legs. Just slowing you down quite a bit.

Note: I submitted a trimmed version of my run because I ran towards the route from our apartment home here and back towards the apartment afterwards, too. The Strava activity includes both the short trips to and from the track.