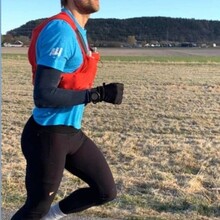 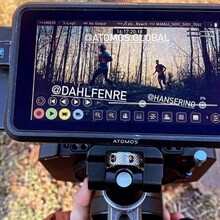 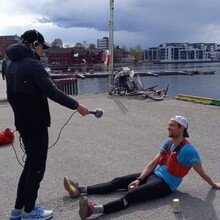 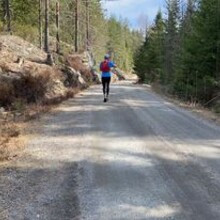 Gut ranger was held as a semi virituall race 01.05 with 95 athletes on startlist.

My goal was to run the route under 9h sice i had the old FKT on 9h23m.

The conditions was amazing. 0 degrees on start clare sky and no wind. it had been dry for two weeks and a little snow abow 400m was just making the corse faster. Due to the cold night the snow was compact and hiding the swamps. during the day temprature was up to 12 degrees and comfy.

I started off at 07.00 together with 19 other athletes and my pacer Hans Kristian Smedsrød who shuld follow me the first 50k. we startet off in a fast pace and got a big gap to the others already first km. my plan was to push the speed while i was fresh in the start and try to manage the pain in the end when i anyway would be tired. we changed bottles and godt some food after 11k in Jarseng and was there 10 minutes ahed of FKT pace. The next section of the race we had a minor change of route due to construction work on the dam of Movann. We had to run about 200m down river to cross on a wood bridge, totally about 400m extra. We had good speed up to Galten and further to one of the highest points for the route at V.Vealøs 500m altitude. We arrived at checkpoint Solvika at 32k 20minutes ahed of FKT pace had a fast chenge of bottles and took more food and Gels. From Solvika its more demanding Terreain and speed goes down. i started to feel the offensive opening pace and had to change from fast and light to grinding gear :) i got a can of coke from my father in law at Skrehelle 42k and was there 30mimutes ahed of FKT pace. Hans Kristian stepped out before the road section from 47-51k and i got to Checkpoint at Ulvskollen P 43min ahed of FKT pace. i Changed bottles, took more food, but starting to feel the race and could not get in normal food. i used Maurten 100 gells for the rest of the race. from 51k to 60k the route is brutale. you come from a road section and starting a long acent that is gradualy steeper and more and more demanding terrain with rocks and routes. in the end of the climb it was tough. i managed ok. i was fater than last time but still i lost to my own pace in the clim to Gjeitebuvareden. From 60-72k is my favorite terrain in the route pinewood flowting singletrails. its the part of the route where i really planned to run fast. but i did not have the energy to push. i still did not loose to the FKT pace but i was slower than expected. i got to Checkpoint Skotfoss at 72k and started to have cramp tendense in the hamstring. took two salt tabs and was off. last part of the route is my naighbourhood and i managed to squeese some more juice out to get to the finish 50 minutes faster than last year.

all in all really happy with the attempt and my strategy worked. i used the speed when legs was good and managed to keep it stabile in the last part of the race.

big thanks to the crew with my father, whife, father in law and friends. Amazing to have som much positive people aroud you when doing such a "stupide" project like running 88km ;)