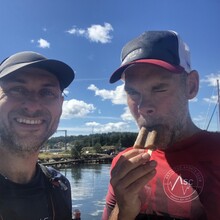 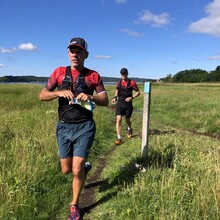 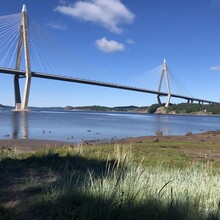 We took a train to Uddevalla, and a short jog of 2km to the start of Kuststigen. We planned to run it as a team of 4, but David had to pull out before the start. So we started out as a team of 3 with Tomas, Rikard and Johan. The first part was through streets and trails in Uddevalla down to the harbour. There the rout changed to trails, paths and tree bridges along the fjord out to the great Udevalla bridge. After the bridge, we followed the coastline on trails and small roads to Ljungskile, where Johan dropped of. We stopped for a coffee and refill of water here, at 35 km. Tomas and Rikard continued along the Ljungskile bay. It had gotten real hot now, so we stopped for a quick swim in the ocean, and then continued on. From here we ran along forest trails and gravel roads in a hilly section of the course, until we reached the Kolhättan ferry station and the end of the route. We then refilled with energy and continued on to Stenungsund and the ride home.