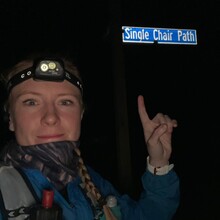 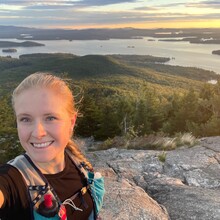 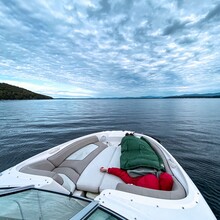 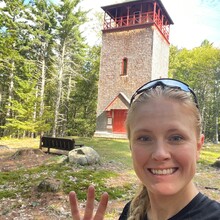 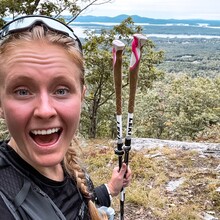 Wow, what a special day.

Camped over at Gunstock the night before for a very early start and hit the start of the BRT at 3:02 AM. The night was perfect running temperatures and very clear sky, I actually ended up turning my headlamp off on a few of the ridgelines to see the stars. I kept with the progress but wasn't moving at all that fast through the rooty, rocky terrain in dark. Lost some time trying to find the filter spot I normally use at the pond, and then a bit bummed when something with my filter seemed off and my water was GRITTY- oh well, there will be plenty of water for the rest of the run! Made sure to tag all the summits listed that have spurs. I was pretty happy when the sun finally started coming up as I went over Straightback and was treated to a near-perfect sunrise on Major with only a few other parties at the summit. Made my way down Major to the parking lot and then started the ever-pleasant (sarcasm-intended) road run. I took a shortcut down to Woodland road on an old abandoned section of street where you can pop out right at minge cove from the woods (which I only know about from biking around as a kid). Got to minge cove ahead of schedule and so had to wait 5 or 10 minutes for my crew to come to snag me with the boat.

Having a crew who also grew up on this lake and know the ins and outs of boating and navigating around all the sketchy parts was SO helpful. It was great to be able to check out and not captain the ship between islands and make sure I ate, drank, and even got a nap in across the broads. Here's a bit of a summary of each island:

Water was at a pretty low level on the lake so we didn't risk navigating through hole-in-the-wall on the way to get to the Melvin Village gas dock. I always forget how shallow and sandbar-ey Melvin is! My crew dropped me off at the gas dock and headed back out with the boat to return it to the slip and grab a car to retrieve me upon my finish!

Started the road run up to the Ossipee Range from Melvin village carrying all my water and foot for the leg and definitely got a few funny looks, ha! Forgot how steep it is up to Bald Knob. Fantastic views on Bald Knob and it was so cool to be able to see Rowe and Gunstock across the lake, I kept telling myself "I came from there!" My watch died so I had to switch to tracking on my phone. The trail on the Shaw side of the Ossipee are really just old carriage roads so they are very runnable, however, I found them rather mindnumbing at that point in my day and started hitting the wall a bit after Shaw when it started drizzling. Tried to push myself on the run over to Faraway bit by the time I got there it was full-on pouring and very muddy and slippery! When I hit the faraway mountain spur there was a chain across the trail and a closed sign so I was not able to tag that summit. Following trail signage seemed more important than an arbitrary route that some crazy girl made up (that crazy girl is me, btw) so I skipped it and moved on. *If this summit is open in the future I'd recommend it be used as part of the route, however only if it is open*. I then made my way across Roberts on some VERY slippery slab and at this point, I was very wet, very cold, and very muddy. Had one frustrating moment where I lost the trail down off Roberts around dusk where I probably lost 5 minutes (which felt like an hour). Was a little bummed I had to pull out my headlamp at the very end but made it to the car unscathed!

This was my second biggest mileage day, and probably my biggest day considering terrain and elevation, yet and I am really proud of it. Mostly I'm just over the moon about how special it was to have an adventure in the very place I was raised and somehow coming out appreciating the lakes and mountains of New Hampshire EVEN MORE than I already did (which seems near impossible).

A huge thanks to my Crew: Christian and Zoe, for making this possible, to my family for letting me steal the boat for the day, and to the Lake Region Conservation Trust who puts so much effort into preserving these wonderful places.

The bar has been set and I can't wait to watch others bring my time down (as well as maybe even attempt this thing self-supported via paddle or sail). Get after it!