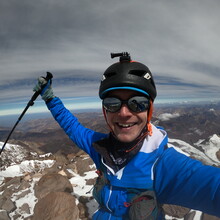 Left around 0730 for a solo push to the summit. This was mostly a recon mission but I'd be lying if i didn't say I'd looked at the mulas-summit-mulas record and just played out some best case scenario splits.

Still, I wanted this to be a fairly moderate effort with the big day still to come (and i feel like the first time on a big mountain always involves some learning.

So I set off from the ranger station and then headed up the climb towards Canada. Felt great and hit 5060m parallel to camp (i didn't go through camp) at 39'47 and then up to Nido in 35'.

I was right on the record splits I'd looked at the night before and somehow spent 6.5 minutes just putting crampons on and maybe changing a layer or 2.  Need to be way quicker than this on fkt day.

Headed up from Nido and had mostly excellent conditions still. Passed 6000m in just under 2h00 which i knew was an important split, i was still right on pace.

There's a long traverse on the normal route around 6450m which is fairly exposed on the right side. This was the first time I felt a bit nervous as the snow was already soft at this hour and I could feel my hiking crampons (the same ones which had failed me and almost killed me on ojos) might not be good enough. The uphill was fine but I was a bit nervous about coming back down.

That said, I think I did a good job of both not panicking and also not getting summit fever.   I evaluated the route and my gear and ability and judged that the deeper powder to the sides of the well worn foot print path would provide the needed traction for a safe descent.

It's also worth mentioning that there were a ton of people on the trail at this point, mostly between the traverse and the final left hand turn up to the summit. This definitely slowed things down a bit but also made me more confident in dealing with the snow.

It took about 45 to get to 6500m and then (once I made the final left) it was actually easier going (more rocks) but slower to the summit. I could see it was going to be super close for the ascent record but then all of a sudden, i scrambled up a few meters and i was on the summit, all alone, on top of the world.

I actually teared up a bit as I took a short CUMBREEEEE video. It was more emotional than I expected.

I stayed up there completely alone for about 5 min. I was still thinking about the round trip record at this point, so I didn't dilly dally too long.

The descent was pretty delicate. I realized very quickly, probably within the first 15 minutes, that i wasn't going to get the round trip mark, which actually made things way more chill. I'd already gotten the ascent record and felt no rush. I just had to get down safely.

And so I took my sweet time and only freaked out maybe once on a very loose, steep pitch of snow.  Mostly I stuck to the deeper snow on the edge of the trail as I'd planned and it was fine, just extremely focused and slow.

Thus it took me 53 minutes to get down to the great schmenzer (just under 6500m). I stopped a fair amount here and on the way down to Nido to take some photos and videos and just enjoy being up high on a lovely windless day.

At Nido, I changed out of crampons and then had a really great descent down to camp. I think it was 10'30 to Canada and 11'48 down to the edge of camp (and then another 2 min jog to the ranger station).

In all, it was 5h43, almost exactly the same time as Karl split during his FKT, though I was over an hour quicker on the up and he was similarly an hour quicker coming down.

Learned SO much today. Huge for my confidence and just planning of logistics and splits. Exactly what I needed and hoped for.

Now it's just the patience game. Staying out of trouble and waiting for good weather!