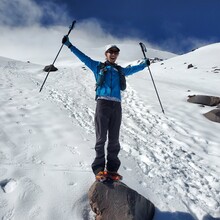 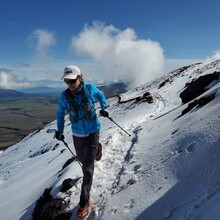 I am honored to share this record with my good friend and inspiration @Karl.Egloff who set the legendary mark of 1h37 back in 2012 and has since established himself as one of, if not, the best big mountain speed climbers in the world (w/ records on Aconcagua, Denali, and Kilimanjaro, to name a few of his @fastestknowntime accomplishments, all of which were former records of @kilianjornet).

This was a big one and a last-minute decision as we were granted a brief but beautiful window of good weather in the mountains. I hadn't been over 5030m since we got back from Chile 3 weeks ago, but trusted in our home base here in Quito and the good recovery I had after the Ojos del Salado FKT to give it a go.

FULL DISCLOSURE: As Karl himself has said many times, running or climbing for speed in the mountains is a beautiful thing, but you must have experience.

I had to think long and hard about the risks associated with a solo, speed climb on a nearly 6000m glaciated mountain before I decided it was something with which I was comfortable. I've been climbing mountains for almost half my life and have experience with great days and dealing with life-threatening emergencies. These types of routes should not be done solo unless you have the kind of specific experience to help get yourself out of a dangerous situation if need be.

That said, I feel extremely grateful to Apu Cotopaxi for permitting me safe (and quick) passage to the summit and back. I have never run so hard downhill as I did in the last few hundred vertical meters on this one (@walmsleyruns would probably still consider it a jog).

This past month, which has included the #FKT on Ojos del Salado, Tungurahua Volcano, and now Cotopaxi, has been an incredible rebound for me from the disappointment of @HOKAONEONE #ProjectCarbonX2 in January. And, as the great Matthew McConaughey said,

“I step in shit all the time and recognize it when I do. I've just learned how to scrape it off my boots and carry on.”

Thanks @chaski.endurance, @hokaoneone, @ultraspire, and all y'all.