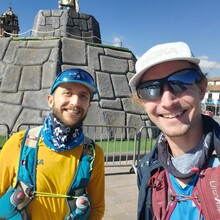 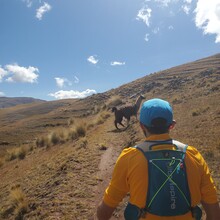 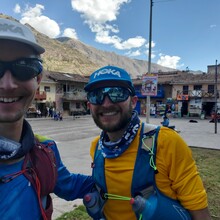 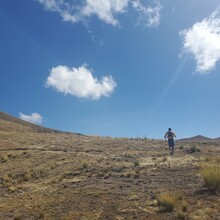 After a very frustrating morning driving to the CUZ airport to pick up my lost bags (which were still 500 miles away in Lima), we made the most of the trip to the city and decided last-minute to send a new route from the Plaza de Armas in Cusco to the Plaza de Armas in Pisac. We’d Frankenstein’d together a bunch of mountain-bike trails, random heat-maps on strava, llama paths from google-satellite, and high mountain dirt roads to create a route that we thought would work. We knew it’d be full aventura.

We left from the Plaza de Armas and headed up towards Saqsaywaman and were lucky enough to be able to cut through the ruins without issue. Very cool way to start the route! From there, we followed some animal trails off the road through some forested land, past a bunch of farmhouses, and finally out of view of the city and into open mountain country.

This was maybe the most fun and beautiful part of the route as we made our way across wide open paramo with no real trail, just heading in the direction of the 3 lakes which would lead us back to the Sacred Valley. There was a bit of up and down, but we stayed above 4000m for this entire stretch.

The lakes were spectacular, with herds of llamas and sheep grazing on the sides, and we found ourselves on an actual dirt road at like 4300m (14,000+ ft). Pretty wild.

From there, we followed a trail up and over the last high point and then could see the town of Patabamba below us at ~3900m. We followed a road and cut down through switch backs to the town and followed the main dirt road through town to a very steep descent down towards the river.

We had to stop briefly for Joaquin to get a cactus spine out of his shoe which had gone all the way through the sole of his speedgoat and the tip was stuck in his heel. I had to yank it out. All good after that.

We could see Pisac at that point and followed the steep descent that pedestrian commuters must have cut into the mountainside to avoid walking the extra distance on the switch-backs. My quads were getting a bit worked by the bottom (we had nearly 1600m of total descent) and it was getting very hot as we got lower, but we made it down and then popped out onto the normal running road, about 5km downriver from Pisac.

We ran together fairly moderately ~4’10-25/km for the last 5K. We were both pretty worked and it was hot, so this didn’t feel easy. Finally crossed the little bridge and cut up the highway and through town and into the main square and ta-da! We were home.

Overall, this was a very, very cool route. Lots of beautiful high altitude route-finding, spectacular lakes and wildlife, great climbs and descents, and I always love the aesthetic of running from one important place to another.

This route can certainly be done much quicker -- we had to stop many times to find the route, backtrack, bushwhack, pull-cactus-spines-out-of-shoes-and-skin, etc. But I’m very glad we’re putting this up so others can go for it. It’d be very cool to do in reverse or even as a very beastly out/back.