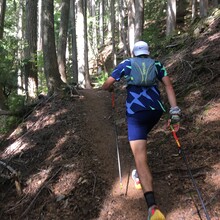 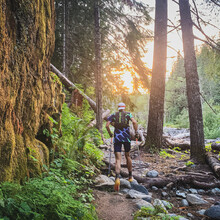 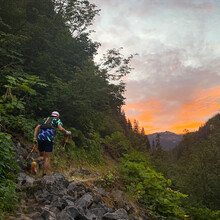 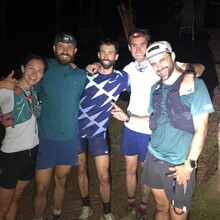 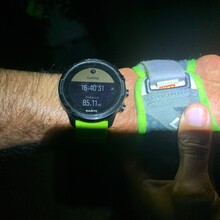 This was a special day on a special trail. Started and ended at Longmire with crewing at Mowich Lake, White River, Box Canyon, and finally dropping everything at Reflection Lakes for the final descent. I believe Gary started and ended at the road in Longmire, but I started and ended my watch about 100m up this short spur where the Wonderland Trail begins, a short stretch that isn't traveled when starting/ending at Cougar Rock CG (note: I initially started my watch at the road, but when I realized the trail started 100m up the trail, I stopped the activity, deleted it, and started a new activity at this junction). I lost the trail for about 4 minutes at the very first water crossing at Kautz Creek that put me into a  frenzy, but otherwise navigation was seamless. At Devil's Dream, a couple guys (Brad Leatherborrow and Aaron Long) joined me for about 7 miles till Puyallup River and their company was really appreciated to keep the mood light. They'd been planning a 2-day trip around the trail for a while and asked if they could join me for a bit, having seen my FKT attempt announcement on Instagram. My wife Rachel ran from Mowich to just below Golden Lakes to join me for about 7 miles, and friends Brandon, Sean and Jordan paced for stretches from Mowich to White River, White River to Box Canyon, and Box Canyon to Longmire, respectively. The crossing over White River was treacherous but I'm glad we crossed and took the trail rather than taking the road detour. I took every opportunity to minimize the time I was still, carrying enough water to make it through each stretch without refills, swapping packs when I met my crew, and having my crew walk with me while I ate at all our checkpoints. There were low points, but I was very happy overall with my ability to move well. When I reached Box Canyon, I thought I was behind Dylan's record pace and my crew had to convince me I was still in it, and even ahead. My climbing legs miraculously came back to me during the final climb and the descent to the finish was smooth and celebratory. I was quite surprised by the time! (note: Strava says the elapsed time was 16:40:55, but the photo of my watch at the finish says 16:40:31). I brought a Garmin inreach mini till White River, but my crew took it after that, saying it wasn't working, or at least that it was very unreliable. No FKT is ever safe, and that's even more the case this summer with so many fast inidivduals throwing themselves at routes like this. That said, I'm so grateful to hold this record at the moment. It's been a huge goal of mine for some time, and completes a bigger goal of holding the three classic NW volcano circumnavigations (Loowit Trail, Timberline Trail, and Wonderland Trail) concurrently.