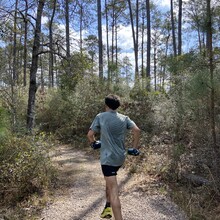 (Picture was taken at the end of the trail by my lovely girlfriend Vidya, not representative at all of the terrain you will see over the run!)

Wonderful day out on the Turkey Creek trail.  I was blessed with absolutely perfect weather, ranging from lows 40s to high 50s over the run, a big reason I consumed so little on a trail run.  Trail was in pretty good shape, it's mostly covered in leaves, which can make spotting roots popping out of the ground quite tricky.  There are some points that are less well-maintained, making it hard to even recognize where the trail is due to overgrowth.  ~Miles 11-14 are where you can really see this, as you will have to do your fair share pushing overgrown plants out of the way to reach the kirby nature trail.  There were some very small hills throughout the run, but not to the point where it will actually affect you at all, felt very flat.  Went out on the day with the main goal of just completing the run without any navigation problems with the side goal of setting the FKT.  Also was ready to make it almost a 50k by adding the entire kirby nature trail, unfortunately the bridge was still closed.  Had 2 navigation errors, coming from both directions at the dirt road ~6 miles/20 miles into the run, there are just so many random paths that look like the turkey creek trail!  But I probably only had ~0.2 of extra mileage.  I hit the halfway point at just a hair over 1hr and 30 minutes and was feeling good and relaxed, but then my stomach started to revolt on me.  Not sure what it was that I ate yesterday, but something was not sitting well, and I had to stop twice on the way back to take care of it.  After that, I was checking my watch and saw that I was ahead of the current FKT pace by quite a bit, so I just eased up to keep things easier on my stomach and also to leave some energy left in my legs.  Once I got close, I got excited and felt the need to speed to finish it up.  Overall, pretty happy with the effort, didn't feel like I got anywhere near redlining, as I even negative split HR over the run due to taking it easy on the way back.  The trails are not perfect, but I think it's very possible to run sub 3hrs, I mean if I didn't make the navigation errors, have to stop for stomach problems and kept up the pace in the second half of the run, I probably already would have achieved it.  Hope other east-Texas trail runners give this a shot!