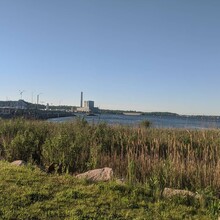 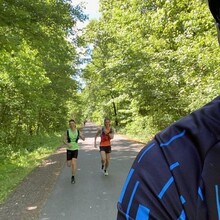 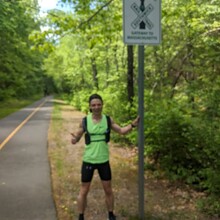 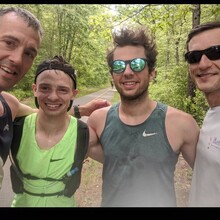 Made it out of Connecticut alive in 7:11:50, over an hour faster than the fastest known time for the route. I honestly had no idea what pace would/should be so I put out 7:45/mi as a guess and 7:11:00 as an overall time. In no way was I consistent, but it was pretty cool to be that close to it! (Blurry pictures due to the copious amount of salt that coated everything I touched)

I was blessed with the best support team I could ask for: Scott Bushey, Jacob Gardner, Tyler Raymond, Dave Fusfeld, Karol Szoch, Tim Goric and Michael Riordan made sure I wasn't alone for any stretch and I'm certain I would've failed without them.

I learned a lot about my mental limits, running fueling, and how crazy some of the stunts the Ultra community pull off. After two ultra marathons in 6 days, I can safely say it will be awhile before anything like this will be attempted. I chaffed in places I didn't think could chaffe, my feet swelled like balloons, and I couldn't eat even though I knew I had to. Today cracked open a door and I peered inside but I'm definitely taking a step back. For now.

Most importantly, thank you Katerina Katexi for her support and encouragement for this and other crazy ideas of mine.