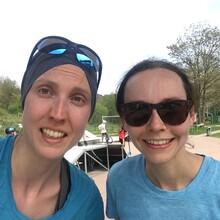 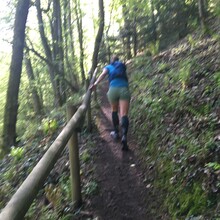 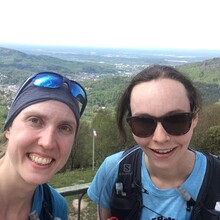 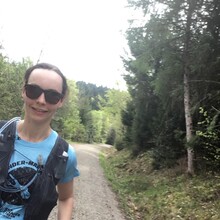 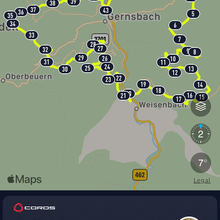 We, Wiebke and Steffi, set off for our FKT attempt of Gernsbacher Runde at the Wanderportal Laufbachtal on Saturday at about 9.15 a.m. The weather was beautiful, cool and sunny. We used our running packs to take food and water for the whole route. We navigated using the navigation app Komoot on our phones (we took turns, with Steffi navigating the first half and Wiebke the second half). We had to walk some of the uphills, as the terrain is quite steep at times, but managed to run a lot, too. It was strenuous, but also really fun. It wasn't very crowded on the trails - except for the summit of Merkur, we just met a couple of hikers. Some strangers cheered us on along the way, both in Loffenau, where we ran uphill into the forest, and when we descended from Merkur near the end of our route.