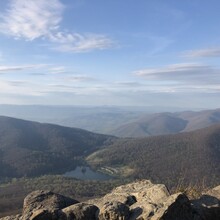 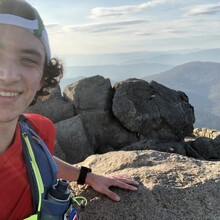 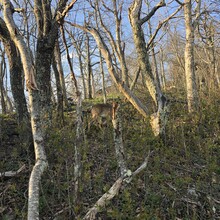 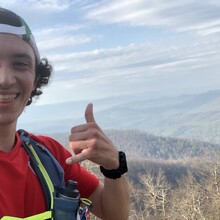 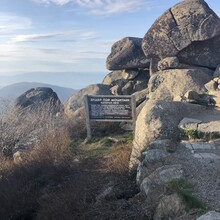 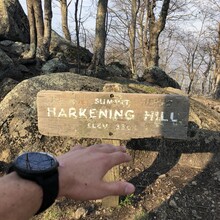 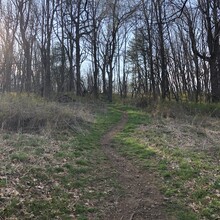 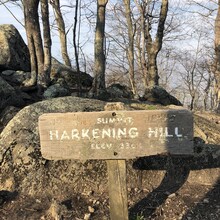 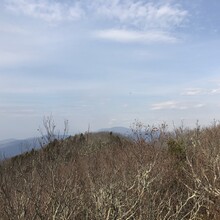 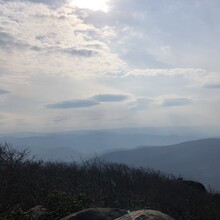 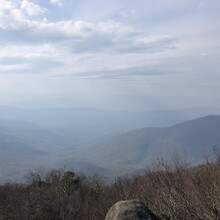 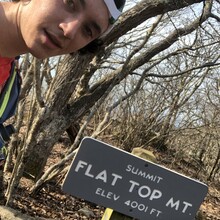 Today I ran the Peaks of Otter route. I started at 4:34 on 4/13/21, and it was a gorgeous day with the temperature around 70 degrees. I took my 1.5-liter bladder and filled it up. I also two 12 oz bottles one filled with water, and the other had a Nuun hydration tablet in it. For food, I brought two Clif bars and a Chick-fil-A honey packet. I decided to tackle flat top first; right after I started, I passed two hikers heading to the top. I quickly realized that much of the day would be walking because of how steep this route is. I made it to the top in 33 minutes after passing a family heading back down and began the decent. While I was at the top, I noticed that there were not yet leaves on the trees on any of the three peaks I was running. The beginning of the descent down flat top is very technical, so I could not go super fast there, but once I got past that, I started making decent time. I passed all the hikers I saw on the way up as I was going back down. My total time for flat top was 51 minutes. I got down to the parking lot and started heading for harkening hill. One of my goals was to be under 1:10 for the first 5 miles, and I came in at around 1:08, so I felt pretty good about that. As I ascended harkening hill, I was able to run more of it than flat top, and I passed two people. I hit the summit somewhere in the 1:20 area and began the descent. I felt excellent and fast on that section, and it was my fastest running of the day. I made it to the sharp top parking lot where my car was but did not use it as an aid station in order to remain unsupported. As I began climbing sharp top, I had my first "food" of the run: the honey packet. I only passed one person going up sharp top and had the summit all to myself when I eventually got there, which is really rare because of how popular that hike is. That climb was very hard and my slowest part of the day, but once I tagged the summit at 2:05, I knew all I had to do was not get hurt going downhill. My main focus was not to twist my ankle or trip, so I was careful with the first part of the descent. I could hear David Horton's voice in my head saying, "Don't be stupid." I soon realized, however, that I could make it back in under 2:30, so I tried to speed it up a little, and I succeeded. When I reached the bottom, my watch read 2:25:44. Overall it was an awesome experience, and I am so thankful for God's beautiful creation and the opportunities he has provided me with.