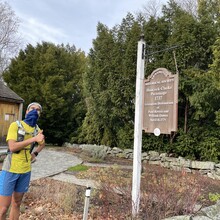 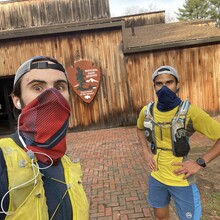 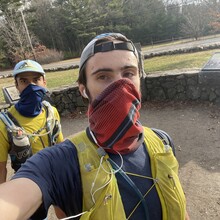 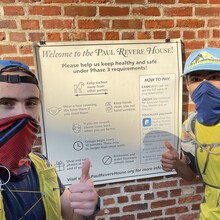 An all-around sendy effort on one of Boston’s trademark™ historical routes. ‘Merica. We couldn’t find a second car for this point-to-point route, so we had to improvise – adding just a touch of extra send.

Rendezvous was at 7:30am; it was a foggy and wet Sunday morning in mid-December. In search of the Paul Revere Capture Sight, the western terminus of the route, we drove Theja’s car into the vast suburbia surrounding Boston. There we abandoned his car and began our harrowing bike journey to the Paul Revere House. Indeed, before the true journey even began, our willpower was tested.

Within the first couple of miles, Theja’s chain fell off. Oh dear. Soon thereafter, we took a wrong turn down a dirt path that led to the incorrect location. At one point, Theja even had to use his biking skills to hop over a 2-inch pile of snow. The following conversation then ensued:

“Did you see me gap that pile of snow?” He yelled back to me.

On top of all of this, our fingers and toes were cold during the bike ride. Tragic. But this too did pass, and the fog began to clear as we got closer to Boston proper. After 16 of biking and some extra effort, we found a suitable bike rack near the Paul Revere House – it was “go time” ™.

We were able to navigate the busy downtown part of the route well, save some bridge construction on the North Washington Street Bridge that slowed us down a bit. We were both feeling great for the first many miles, cruising along well faster than we had planned. I’m sure Paul Revere felt much the same way – his spirit lives strong with us on this fine day. Perhaps we’ll get his autograph at some juncture.

Once over the Charles and into the meat of the run, it was pretty smooth sailing for quite a while. The sun was out with temps in the mid-50s. Several miles in, Theja mentioned that his shoes were rubbing his feet a bit strange, but it never developed into a major issue.

Things took a bit of a turn somewhere between miles 12-14. We’d unknowingly been pushing each other a little bit more than planned, and it began to catch up with us. We got a little bit gassed, and I personally had a wonderful recurring stomach cramp on the right side, which kindly appeared in nice 30 second intervals. Argh ye old cramps!

We hit the small out and back to take a picture at the Hancock-Clarke Parsonage, about 3 miles from the end. At this point we mutually agreed to not kill ourselves too much in the last section, as we were already making great time. We once again reached our end destination – the Paul Revere Capture site – with an elapsed time of 2 hours, 27 minutes, 1 second. (not including the biking, obviously)

Truthfully, not an overly scenic route. But it does have some really cool historical pitstops along the way. Thanks to Richie Rodriguez for giving us an awesome time to chase. We look forward to holding this FKT for the next five minutes until it’s broken.

P.S. – Here are the Strava tracks for the bike ride, if anyone cares (Theja forgot to start his watch for a couple minutes):