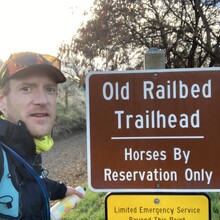 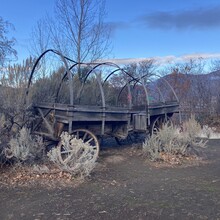 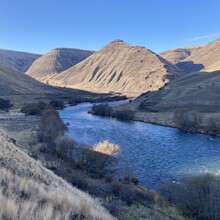 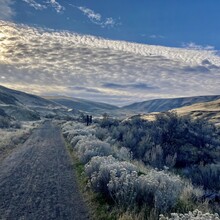 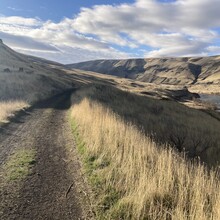 This is a proposal to create and establish an FKT for an out and back variation of the Deschutes River Railbed Trail (OR).

Given the sadness of not being with family for Thanksgiving holiday season this year, I was craving a challenging solo day in the outdoors to reflect and reset.  I also wanted to get some time on the dry side of the mountains and test myself with a more runnable route than I've done in a long time.  I have some other out and back style route goals for 2021 so doing Deschutes River Railbed Trail (OR) both ways would be a great way to prepare and practice the unsupported "cache and carry" style of dropping water along the way for the return trip.  All in all it was a wonderful, and tough, day.

I started at the north end of the trail at the Deschutes River State Park at 9:26 am after driving from Portland that morning.  I wanted to give a good effort but I knew I was unprepared for such sustained runnable terrain and that I was likely to pay for being overly ambitious....and I was correct! :). I went out too hard for the first 16 or so miles and early on knew I'd fallen off my original goal of sub-9 hours.  The southern most 6+ miles to the turn around at Macks Canyon Campground are much slower and more rugged than I anticipated and my legs were already feeling the over-effort.  I hit the turn around after 4 hours and 21 minutes and headed back, alternating walking and running.  The last couple hours were in the dark but I didn't break out my headlamp for the moon was bright and I prefer to go lightless when possible.  My phone died literally ~20 seconds (and maybe .05 miles) before the end; Strava said 9:26:49, so I feel like rounding to 9:27:15 is reasonable.

This effort was unsupported.  I carried all my water for the day from the beginning (3L bladder, 26oz handheld bike bottle, 16oz soft flask) and cached the 16oz soft flask on the way out at ~mile 11 for the return trip.

I know this beautiful and very-runnable almost-50 miler can be done much, much faster...I figured I'd establish a time for folks to go after!  I would like to go for it again too sometime...  Can't believe I lived in Portland (only 1h 45m drive away) for so many years and had never been on this route before.  Would be fun to see some more times put down on this route by Portland area and PNW runners!

I tried this route over Memorial Day weekend, 2021, and you might be generous about "much, much faster."  Or else I'm just much, much slower.  :-)  I found the heat of late May to add a significant challenge to this route; I took in more than double the amount of liquid you carried, and it still wasn't enough to cope with the temps and sunshine.  I echo your comments about the ruggedness of the southern 6 miles and what they can take out of you.  I hit the turnaround slightly quicker than you, and left slightly later (after filtering water to refill my pack), but felt pretty under control. However, the second time through the rough section, plus the heat, just wiped me out.  November starts to look like a much better month for this.  ;-)