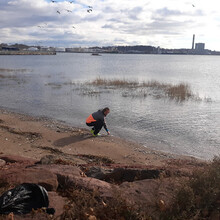 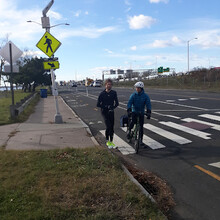 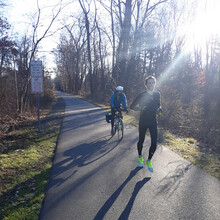 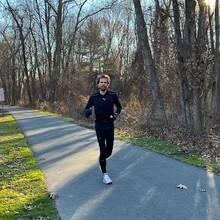 Had my eyes on this one for a while and made it my final race effort of the season.
Decided to go today and not tomorrow because today was sunny. Didn't think to look at the wind forecast when making that decision so that was an unpleasant surprise when I woke up. Decided to just go for it and hope that the wind wasn't too bad (it wasn't).
We met Jerome at the 35-mile point, where we put his bike in our car and then drove to IKEA. My wife Linda had already planned to spend some time at IKEA to get things for the wardrobe that we're going to build and coincidently the start of the FKT was just across the street from there.

Technically the Farmington Canal Heritage Trail starts a little more north, but there's an extension on the maps to the waterline that several of the previous FKT runners had done as well, and I liked the idea to run from the south CT border to the north CT border.

While the FCHT is really nice, I wouldn't say the full 55 (CT) miles are. It's roughly 25 miles of rail trail, then there's a 5-mile gap, and another great 25 miles of rail trail. The gap is basically all along busy “stroad” Route 10. On one of the maps of the FCHT there’s an alternative route through Plainville, but that has like 30 turns and it will be hard to not get lost. Route 10 is the way people have been going for the FKT, so that’s what I did.

First marathon distance in 2:58, which was the most optimistic scenario, and maybe too fast.
After that the struggle started, mainly just my quads complaining. Excited to see my wife Linda at mile 35, who would meet me roughly every 5 miles after this, but sad to see my bike pacer and motivator Jerome go.

After the longer break and with the fresh shoes I felt better and brought my mile splits back down to where I wanted them... for 3 miles.
40-45 was just not fun.
45-50 I started to feel good again and was thinking about when I could start dropping the hammer (relatively... still in the context of ultra-running ?).
For 50-55 I didn't take any bottle or gels with me, just my phone ("we travel light, let's hunt some orc"). I also needed my headlight as it had gotten dark. I was running fast, but it felt a lot faster, I guess that's what running 50 miles before and the headlight tunnel vision do.

I almost stopped early as I knew the MA border was at a bridge just beyond the last parking. After a first bridge I didn't see a big Massachusetts sign, and I felt it came a little soon, so I kept pounding away, wondering if I was just adding on...
But not much later there was a second bridge with a MA sign, so I had it right. That would have been so sad. Stopping 0.2 miles early.

All and all a great day on my feet! Thankful for Linda supporting me with this crazy hobby of me, and for Jerome to come out and help, entertain and motivate me!