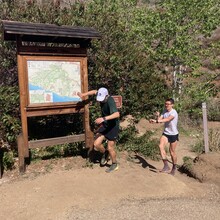 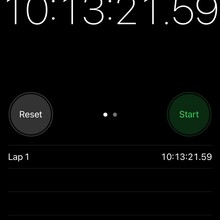 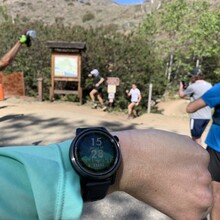 My crew and I arrived at Will Rogers around 5:05am and walked to the start of the Backbone Trail. We ended up starting about 40 seconds after 5:14am since it was cold and there was no reason to wait after I finished tying my shoes. My pacer Eric had tons of light which made the early dark portion faster than I thought it would be. I tried to balance the benefits of an early start in cool temperatures with the disadvantages of slower running in the dark since I knew the temperatures would be getting higher than usual on Saturday. The section from Las Virgenes Rd to Kanan Dume trail head was pretty brutal as this was the start of the rising temperatures. The plan was to not start working too hard until Encinal Canyon Road (mile 40) and then try to push from there to the finish, but really it took a conscious effort to just stay on pace. My crew doused me in cold water and filled my buff with ice at every road crossing. It felt quite hot although I am not sure what the high was during the day. I consumed CarboPro, Gu, and gatorade pretty much exclusively the entire day which helped speed up the aid station stops as I just ran through them and exchanged bottles.

At the turn off of Little Sycamore Road to the Backbone towards Ray Miller, I had about 45 minutes to get to the finish. I was down about 10 minutes pretty much the entire day so nearly all of the gained time came from this section. However, at about mile 64.5 my watch died which was about 25 minutes from my finish. My pacer and previous record holder, Jeff Stern, had his watch running since he picked me up on Little Sycamore Road. I have attached 3 GPX file with this submission. The first file, "WyattBackbone.gpx" is the file from my watch that began in Will Rogers but cuts out short of the finish. The file title "Ushering_in_the_Backbone_Reclamation.gpx" is Jeff Stern's file from the day and you can see where he met me and where our files overlap in time and space to prove we were together.  The file name "BackboneFKT_WMedited.GPX" is my gpx file spliced with the end of Jeff's gpx file (starting from where mine died). However, I want to emphasize that Jeff ran ahead of me in the last .25 miles to tell my crew they needed to take a time stamped photo (see video of file run down Ray Miller) so the edited gpx file is 8-10 seconds faster than my original time. At the finish, my crew took pictures and stopped the clock that they had running on their iPhones. One picture shows that the clock reads 15:28 as I touch the sign at the finish. Video of the finish shows that I also cross the line at 15:28. The iPhone timer that was started at my start (5:14am) showed 10:13:21 seconds (see attached photo which was screenshotted after the fact). A second iPhone timer another crew member started showed 10:13:20 at the finish (not pictured here). I would consider 10:13:21 as the official time if it is accepted (I started some time after 5:14am which would account for the difference between the iPhone timers and clock times that did not show resolution to the second).

I want to thank my crew, Mike, Danny, and Paul, and my pacers Eric, Jerry, Chris, and Jeff who helped make this possible! If anyone needs any more info, please don't hesitate to reach out!