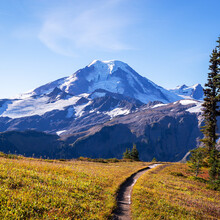 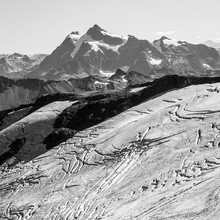 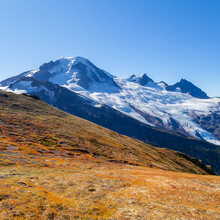 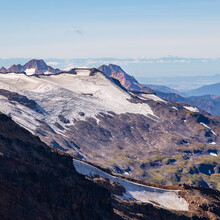 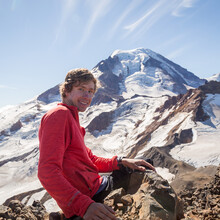 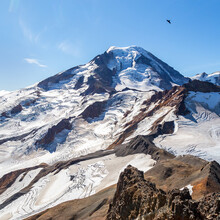 On Thursday, September 16, 2021 I set the male unsupported FKT for the roundtrip ascent of Hadley Peak along Skyline Divide in a total time of 4:58:02. The Strava activity has a total time of 4:58:26, but 19 seconds at the beginning and 7 seconds at the end (a total of 26 seconds) were before/after the official start of the FKT route at the trailhead. This is a beautiful trail and was my second time visiting in the early autumn with stunning fall colors and before it really starts to get buried by the snow. I started just before 9 a.m. and finished just before 2 p.m. on a gorgeous blue skies day. You could clearly see Mount Olympus in the Olympics over 100 miles away as well as some mountains in the Coastal Range in BC that are almost 200 miles away. And of course the views of the glaciers on Mount Baker and the nearby Mount Shuksan were stunning. The trail was completely snow free and I completed it quickly enough that I just needed the 2 liters of water I started out with in my camelback (I think I only consumed about 700 ml during the attempt), although there was a small dirty tarn at roughly 5.2/9.6 miles that could be filtered for water if necessary.

This FKT is still ripe for the taking. Last year's attempt was set at a relatively relaxed pace and so was this attempt for me. I think that the first 7 miles could all be run in under 15 min/mi pace and could be completed in a total time of <1.5 hours. The last mile (half mile to summit, half mile back) is class 2+ or class 3 scrambling on loose rock that is probably in the 20-30 min/mi range. And then the final 6-ish miles on the return trip could also easily be done in less than 1.5 hours. My moving time on the route (according to Strava) was 3:27:40 and I spent more than 25 minutes at the summit taking pictures with my DSLR. I also walked/stopped for long sections on the ascent/descent so I could take more than 200 pictures. I think if someone came out here with less gear and had no stops they could probably finish this around 3 hours.

In terms of the actual route, there's a boot path out along Chowder Ridge after the "official trail" ends at Skyline. I don't know if it's better to stay along very top of the ridge or to follow the boot path as it sometimes cuts across some loose rock. I made different decisions going out from returning and both worked okay. You can take basically any gully up to the very summit. I went up one and down another. Just be aware there's a bunch of loose rock and if you're doing this with someone else you could wear a helmet if so desired.