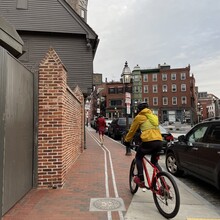 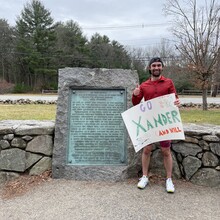 I started looking at this run as a great opportunity to test out my fitness after restarting my training in November without having to get out to the mountains. The previous record looked like an ideal time to motivate me to run hard threshold pace without getting into a race effort.

Arrived at the Paul Revere House in the North end around 7:45am on 12/18/21. Stepped off around 8am. I had Will Peterson on the bike next to me for moral support, navigation help, and to hand me Infinit throughout.

The first 5 miles or so went quickly, a little quicker than I had planned on. Most of the time got picked up because there is so much stimulation and tough street crossings. It didn't make a ton of sense to shift gears down until that messy part was over. Then I hit the first major climb. I was pleased with how my legs responded and didn't give up too much time. Miles 6-10 were easier to navigate and I was able to relax into a good effort. It felt exactly as it should, busting out 6:40s while my spirits were up. I had a brief lapse in positive spirit in the next two miles where I ran a bit closer to 6:50s but felt the cumulative effort of the first 10. Will was valiant in his efforts to change my mindset, talking about some steamy takes he has about the spreads in tomorrow's NFL action. Miles 13-17 went much smoother as the finish line came into striking distance. The last 2.5 of the course is a whirlwind with a significant climb, then about a half mile of downhill. I ended up flying on the downhill and into the park closing in my fastest miles of the day. I felt like I still had a lot of gas in the tank, and felt pumped about how consistent my effort had been through the day. Really nice first test of fitness!

Naturally this record could be taken in a heartbeat by a strong half-marathoner as long as the can get out of the city cleanly. I'm excited to see it happen! Thanks to those who ran this before and made it a fun goal to chase this morning.