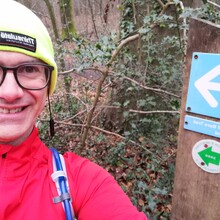 This was my first potentially successful attempt at a FKT.  I had planned this for about a week when the time was about 1h 45m, so I was gutted to see two runners had improved the time to just over 1h 30m yesterday.  This meant that I would have to run a lot faster than I was comfortable with and it wouldn't leave much room for errors.  I live locally, so I'm familiar with the Meon Valley Trail which follows the old railway line, but I hadn't run the Soberton & Newtown Millennium Walk before, so I was relying on the gpx file being accurate.

I decided to start on the Meon Valley Trail, at the Buddens Lane bridge.  There is layby parking available at the nearby Kingsmead.  I ran in an anti clockwise direction, my logic being that I knew I would have a relatively flat finish.

The first section was hilly but pretty easy on well maintained tracks through the Forest of Bere and I was able to keep a good pace.  The middle section was a combination of footpaths and country lanes.  Most of the footpaths are well signposted, but there are parts where the route is not that clear and I was in two minds which direction to run.  The footpaths were not too muddy around Newtown and Hoe Gate, but further north towards Soberton the mud was horrendous and really energy sapping.  At this stage I was worried I wouldn't make it.

The final approach to Soberton was a downhill field which was a welcome relief from the mud.  Once I went past the White Lion in Soberton, I was back in familiar territory and I was pretty confident I could beat the time.  The final couple of miles was on the flat Meon Valley Trail, where I could keep a decent pace until the finish.

I would have liked to have stopped and take more photos, but I was really against the clock and couldn't afford to.  So I only have a photo from the start.  For food and drink I only wore my Camelbak with 1.5l of orange squash and took a single Columbian energy block, which I ate on the move halfway through.