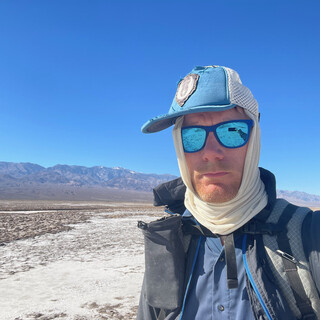 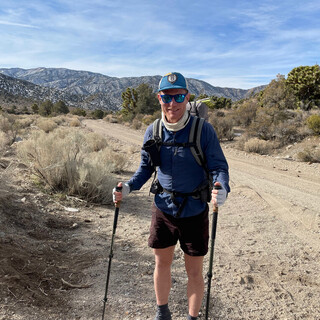 Toxic water, wind storms, poisonous gas – Death Valley lives up to its name. Or at least that’s what Cameron Hummels learned while attempting the 160-mile Death Valley North to South Crossing in February.

And yet, Cameron smashed the FKT.

Cameron traversed the national park in this FKT’s characteristic unsupported, entirely off-trail style in three days, 23 hours, and 54 minutes – four minutes ahead of his arbitrary goal, and three days faster than the previous mark set by Roland Banas.

But those four days were over two years in the making. Cameron, an astrophysicist postdoctoral fellow who spends most of his days using computer simulations to model how galaxies form and evolve, applied that scientific rigor to the FKT research process. To blow the previous FKT out of the water, Cameron knew he would have to treat water differently than his predecessors. Namely, Cameron would have to rely on water sources along the way rather than carry all his hydration needs on his back from the start. Research led Cameron a century into the past, where he unearthed a U.S. Geological Survey report from 1909, “Some desert watering places in southeastern California and southwestern Nevada.”

On his many recon trips, Cameron hiked to potential watering holes described in the book. Sometimes he’d find a muddy puddle less than an inch deep. Sometimes he’d find just dry ground. Cameron collected water samples from these far from pristine sources and sent them away for testing.

The results were not encouraging. But Cameron decided to try the uranium and arsenic-laced water from the safety of his home anyway, reasoning that drinking a small amount of water with five-times the FDA-approved arsenic limit wouldn’t kill him. He felt sick for months.

Tune in to this episode of the FKT Podcast to learn Cameron’s solution to making these water sources at least somewhat potable. Discover what it’s like to get trapped in a haboob – an airborne wall of wind storm – as well as to traverse a salt swamp and suffer from visual, auditory, and olfactory hallucinations. Plus, find out whether Cameron manages to convince host Heather Anderson to go after his record.

Get the full-low down on Cameron’s FKT, along with his stunning desert imagery, over on fastestknowntime.com. And follow Cameron on Instagram.