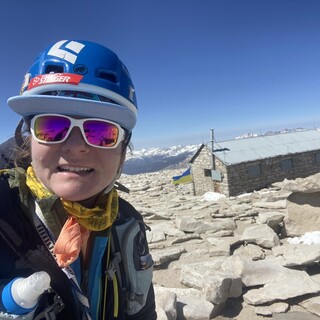 A fever forced Alyssa Clark to forgo her early April race, so a few weeks later she put her fitness to use and set an FKT on Mount Whitney instead. Alyssa didn’t just set any FKT, she went after the self-supported record on the mountaineer’s route from the town of Lone Pine. The 33-mile out-and-back involves a 12-mile road climb, a couloir filled with snow, and fourth-class scrambling before tagging the 14,505-foot summit, turning around, and repeating it all again in reverse.

What inspired Alyssa to supplant a running race with such a mixed terrain FKT? Alyssa and host Heather Anderson get into it on this episode of the FKT Podcast. Alyssa also shares the gear she used for the route, and where she cached various items and resupplies. A teacher, Alyssa talks about the inspiration she derives from her students, and how one simple trick — turning off her headlamp — helped her find motivation on that long road climb well before the sun came up.

And last but not least, Alyssa sends out a rallying cry: women, submit your FKTs! Representation matters. Alyssa may or may not have even convinced Heather to submit a few more, tune in to find out.

Get Alyssa’s full FKT write-up, and check out her supported FKT on the Pinhoti Trail over at fastestknowntime.com. And keep up with Alyssa’s adventures on Instagram.

Any chance you can add a link to the .mp3 file for this one?

Thank you, I look forward to listening!