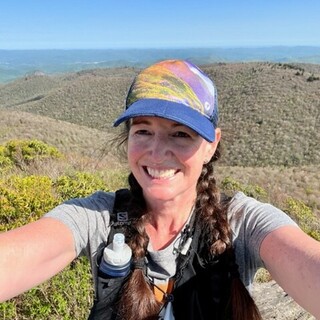 What better way to explore a new place than by foot? After moving from Oregon to Asheville, North Carolina, at the beginning of the year, Julie Wallace started learning about her new home by scouring fastestknowntime.com. Her objective was simple – find local FKTs that don’t have a woman’s time. And then get after it and put a time down!

This strategy led Julie to setting the first woman’s known time on the Shining Rock Wilderness Ridge, a 17-mile out-and-back that traverses a spine of the Blue Ridge Mountains. That seven-hour endeavor taught Julie quite a bit about her new home, including just how steep, technical, and slow-going the Appalachians can be.

On this episode of the FKT Podcast, Julie and host Heather Anderson get into the dramatic differences between West and East Coast trail running. Julie, who’s nearing 50, also opens up about how she’s not letting regret from getting into the FKT scene earlier hold her back from tearing it up now. With her first solo FKT freshly under her belt, Julie shares what it took to make that leap into the unknown. She and Heather also shine a light on the surge of women entering the FKT scene, in part thanks to Women Who FKT.

Get the full lowdown on Julie’s Shining Rock Wilderness FKT on fastestknowntime.com. And keep up with her adventures on Instagram.